In all of American history, only two states have been formed from older states that were already admitted to the Union:  Maine (from Massachusetts, in 1820) and West Virginia, during the Civil War. However, in 1941, some residents of northern-most California and southwestern Oregon—where people had long been resentful of the political power held in Sacramento and Salem by more populous districts—promoted the idea of a separate state. Believing that their largely rural region was not receiving its fair share of federal defense and state public-works money, their publicity-seeking "secession" movement gathered steam to form a forty-ninth state, the State of Jefferson. The protest echoed previous, short-lived efforts, similarly done largely to increase attention for the area among state legislators (for example, the State of Siskiyou proposed in 1909).

The 1941 Jefferson “secession” effort was the brainchild of two well-known regional figures. Initiating the movement was entrepreneur and railroad speculator Gilbert Gable, the mayor of Port Orford. In the late 1930s, Gable had first promoted the concept of coastal Curry County becoming part of California as a way to increase infrastructure spending. Randolph Collier, the California state senator for Siskiyou County (he would later become known as the father of California's freeway system), joined the effort and helped make Yreka the capital of the State of Jefferson.

As the federal government prepared for direct involvement in World War II, the so-called Jeffersonians used the stunt to call for the subsidized construction of roads into the remote mountains of their “state.” They launched the movement as a publicity gimmick to spur federal and state governments to spend the funds needed to tap natural resources such as strategic minerals and timber. County commissions in several northern California and southwestern Oregon counties debated whether to formally endorse the scheme. Five of them did so: Curry County in Oregon, and Siskiyou, Del Norte, Trinity, and Modoc Counties in California.

In November, the elected representatives of the State of Jefferson declared independence on the steps of the Siskiyou County Courthouse. National newsreel cameras recorded the event, which received front-page coverage in newspapers across the country. San Francisco Chronicle reporter Stanton Delaplane earned a Pulitzer Prize for his series of feature articles on the State of Jefferson. The Japanese attack on Pearl Harbor on December 7, 1941, ended the episode, and the former Jeffersonians publicly pledged their loyalty to the war effort on December 8.

The idea of the State of Jefferson is now part of the lore and self-identity of the region. Businesses and other enterprises, such as Jefferson Public Radio, have taken the name. Some local environmentalist organizations use the term to promote a regional identity. Nearly every major election is followed by dissatisfied "Jeffersonian" voters writing letters to the editor urging their fellow citizens to break away from the urban-dominated control of Salem or Sacramento. A brief “re-secession” movement occurred in 1971; more recently, local conservative and property-rights groups have latched onto the name as a rallying cry, bringing a number of rural northern California counties to join the new effort. Ironically, the two Oregon counties that today make the most of their “Jeffersonian” heritage—Jackson and Josephine—declined to join the protest in 1941. 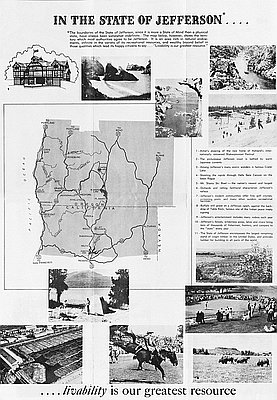 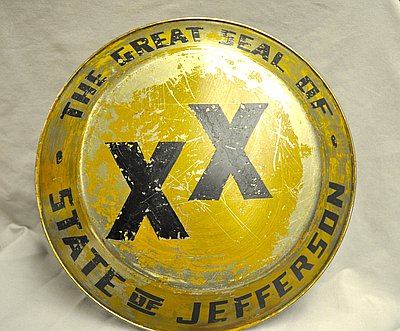 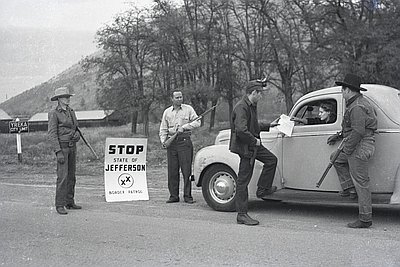 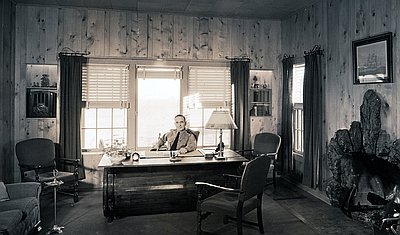 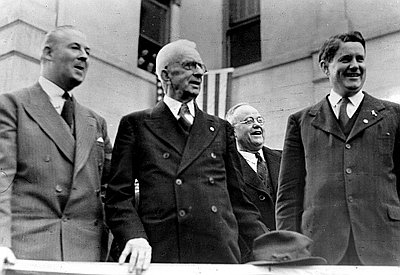 Port Orford claims to be the oldest town site on the Oregon coast, dating to 1851. The Qua-toh-mah band of Athabascan-speaking Tututni people were the original inhabitants of the area. In 1851, Captain William Tichenor, believing the site could become a thriving seaport, brought a small party of would-be settlers …

Although Gilbert Gable lived in Oregon for only a few years, he gained notoriety in the state, both as mayor of Port Orford and as the originator and main promoter of the 1941 secession of the State of Jefferson from Oregon and California.

Owned by and operating from the campus of Southern Oregon University in Ashland, Jefferson Public Radio (JPR) serves one of the largest geographic areas of any public radio station in the United States (over 70,000 square miles). It broadcasts with a system of transmitters and translators extending from central Oregon's …