Rough-skinned newts (Taricha granulosa Skilton) are large, conspicuous salamanders that can reach lengths of 22 centimeters (8 inches). Newts are distributed along the Pacific Northwest coast from southeastern Alaska to the Bay Area of central California. In Oregon, they extend from sea level to the tops of the Cascades, up to 1,900 meters (6,250 feet) in elevation.

Newts inhabit woods and forested areas that contain lakes and ponds with aquatic plants, and they breed in ponds, where the larvae and juveniles often hide in soft bottom sediments. Adults forage by day and night in adjacent forests and grasslands, feeding on small invertebrates, such as spiders, worms, and various insects. Newts are most likely to be encountered on overcast or rainy days.

Compared to other salamander species, newts have large heads with blunt noses. The back is typically light to chocolate brown or black in color; the underside is bright yellow to orange-red. The skin is usually leathery with a granular or warty texture, but this becomes smoother in breeding males during the winter, when the tail enlarges and nuptial pads, used to grasp the female, appear on the toes.

The eggs and the skin of larvae and adults contain a powerful neurological poison, tetrodotoxin, which protects them from predators. When disturbed, the poison is released from glands as a milky white substance. Humans should avoid hand-to-mouth contact after handling a newt.

Disturbed newts may also display an exaggerated posture, the “unken reflex,” an arching of the back with tail and head held stiffly in an upward curve. This posture also displays the bright orange underside as warning coloration to potential predators. Garter snakes are significant predators because they have evolved a biochemical defense against the toxin. Interestingly, this molecular defense against tetrodotoxin is absent in garter snakes that do not coexist with rough-skinned newts.

Crater Lake National Park may be host to a melanic (dark) form of the species. The taxonomic status of the so-called Mazama newt, first described in 1942, has been long debated by biologists. During the summer of 2010, park staff and numerous volunteers conducted an "Amphibian BioBlitz" survey to collect saliva samples of the common and melanic varieties for DNA analysis. The results should be available in 2011 and may help determine whether the Mazama newt is merely a color variety (morph) or a distinct subspecies. A similar melanic variety of this species exists on Gravina Island in Alaska, and further examination will be required to determine the species’ status. 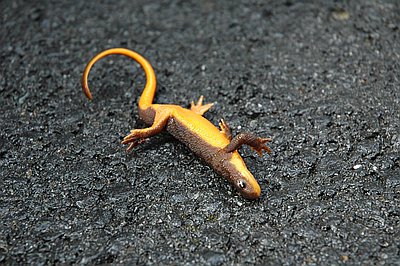 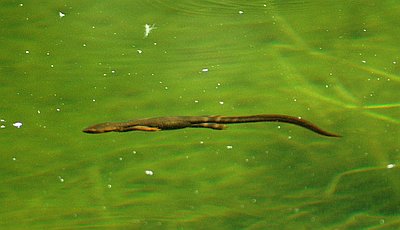 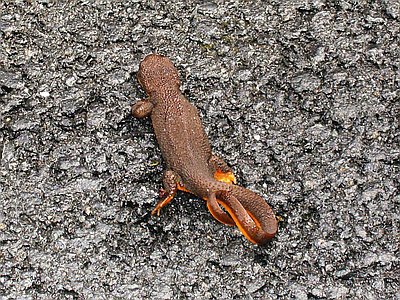