In a state heralded for its tolerance, Stu Rasmussen stands out. The charismatic city council member of Silverton—serving terms in 1984-1996 and 2004-2008—was the first openly transgender mayor in the United States. He/she (the pronoun that Rasmussen prefers) once described himself/herself as “a dude, a heterosexual man who appears to be female.”

Rasmussen, a Silverton native, is easily the most recognized person in the community, in great part because he/she owns and runs the historic Palace Theater, located in the heart of the town’s Commercial National Historic District. As a teenager in the 1960s, Rasmussen sold tickets, ran the concession stand, and operated the projector for his/her father, Albert. As a young adult, Rasmussen managed the seventy-five-year-old theater and took over operations in 1984, the same year he/she was elected to city council.

"My dad was manager when I was born and as far back as I can remember it's been a part of my life," Rasmussen said during an interview. "I'm now disciplining the kids and grandkids of kids I tossed out when I started.” Most evenings, Rasmussen greets theater patrons at the door or from behind the concession stand.

As mayor, Rasmussen was instrumental in developing a community center, expanding the public library and senior center, rejuvenating local business, and increasing tourist trade. A cross-dresser for his/her entire life, Rasmussen decided to risk his/her political career in 1986 by openly revealing what he/she described as a “feminine other self.” Announcing that he/she was transgender, Rasmussen ran for re-election to the city council—this time in a dress and high heels. The people in the small community re-elected the mayor convincingly, Rasmussen said, because “those who know me judge me by how I govern the city and run my theater, than by the way I look.”

In 2008, Rasmussen ran for mayor on a platform of controlling growth and addressing critical public safety issues, receiving a 13 percent majority over an eight-term incumbent. During his/her tenure in government, Rasmussen resisted efforts to add subdivisions and expand the city boundaries, supported community policing, and strongly marketed Silverton as community of antique shops, small family-owned businesses, and open-minded attitudes.

Rasmussen is single, lives in Silverton with longtime girlfriend Victoria Sage and a family of house cats. He/she is often contacted by people around the country, including many in the LGBT community, about gender, social, and political issues. In 2013, the Seattle-based Intiman Theatre commissioned and premiered Stu for Silverton, a musical on Rasmussen’s life. 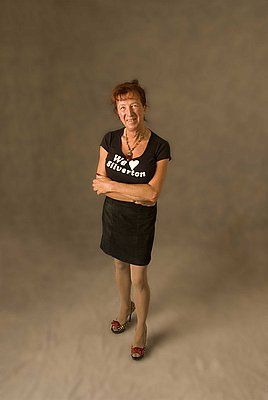