Clarence Pruitt was the first African American to graduate from and later teach at the University of Oregon Dental School (now the Oregon Health & Science University School of Dentistry).

Born on January 17, 1927, in Hot Springs, Arkansas, Pruitt earned a scholarship to Wilberforce University in Ohio, where he first became interested in the sciences. While trying to decide whether to become a physician or a dentist, he worked for a year as a waiter on a railroad line and saved money for graduate school.

In 1950, Pruitt was accepted to the University of Oregon Dental School. As a first-year student in 1951, he received a scholarship for his second year in the program from the state system of higher education. He won the scholarship the following year, as well. While in dental school, he faced discrimination as the only African American in his class, and he was denied admission to several campus fraternities because of his race.

In 1953, Pruitt married Joy Brock, who had been raised in Portland and had graduated from Linfield College. The next year, he earned his D.M.D.,becoming the first African American to graduate from the School of Dentistry. Following graduation, he served two years as a dental officer in the U.S. Air Force, stationed in Las Vegas.

After being discharged from the air force in the summer of 1956, Pruitt joined the University of Oregon Dental School faculty as an instructor in the crown and bridge department. The following summer, he and Larry Lundeen, a white dentist, applied for office space in the Medical Arts building. Gerard Macnamara, the building manager, rejected the application because of Pruitt’s race, stating he was carrying out the policy of the owners. It was the first time an applicant was rejected because of race in the building’s twenty-five-year history.

The Urban League of Portland reported the incident, which was subsequently reported in the Oregonian. In response, the Portland District Dental Society adopted a resolution condemning the owners of any building owner who refused office space to members of the society because of race, religion, or national origin. Pruitt eventually gained office space in the Selling Building, the first African American to establish a dental practice in that building.

For years, Pruitt volunteered his services to dental clinics in Portland’s public schools. He also provided free dental care to low-income families in northeast Portland. His wife was also active in the community, serving as the president of the Women’s Auxiliary to the Multnomah County Dental Society and providing dental health education in public and private schools in the area. As a teacher for the Portland Public Schools, she taught proper dental care to her students and distributed aids such as toothbrushes and toothpaste.

Beyond dentistry, Pruitt was a leader in Portland’s African American community. He was a member of the Urban League and served as president of the local chapter of the National Association for the Advancement of Colored People. He was a principal in the Alpha Development and Investment Corporation, formed in 1964 to develop housing units from the 1960s through the 1980s. The units provided housing to low-income families, regardless of race. Pruitt continued to champion fair housing practices throughout his life.

As an associate professor at the School of Dentistry, Pruitt worked closely with Dean Louis Terkla and Professor Keith Claycomb in the recruitment of minority students. He served as a mentor to African American students, encouraging them to stay with the program despite the obstacles and discrimination they faced.

Clarence Pruitt died in Lake Oswego in 2009 at the age of eighty-two. 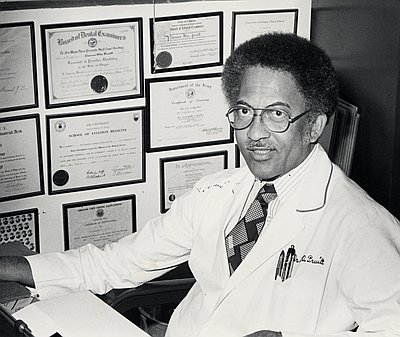 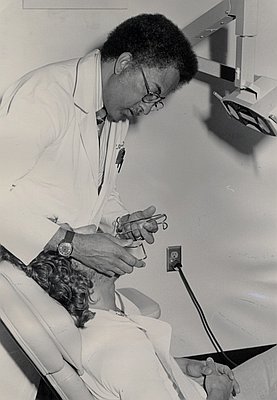