Located at 6,300 feet of elevation on a landmark butte in the High Desert, southeast of Bend, Pine Mountain Observatory (PMO) is owned and operated by the University of Oregon (UO) Department of Physics under a special-use permit from the Deschutes National Forest. It is Oregon's only professional astronomical observatory.

The facility originated in the late 1950s with an experimental telescope installation on Cache Mountain in the Cascade Range west of Sisters. UO astrophysicist E.G. “Eb” Ebbighausen was hoping to find a site that would provide good observational conditions for his work on binary stars. The site proved unsatisfactory, however, with cloudy and unstable weather, so Ebbighausen determined to look for drier weather and clearer skies farther east. After consulting with the U.S. Forest Service, the Bureau of Land Management, and local naturalists, including Phil Brogan of Bend, Ebbighausen and his UO colleague Russ Donnelly settled on Pine Mountain. Observations there began in 1967.

To make the complete facility possible, Ebbighausen—a legendary, much-loved professor and the author of a widely used textbook, Introductory Astronomy—undertook a remarkable personal campaign for grassroots financial support in central Oregon and elsewhere. He enlisted the help of former students in the area and solicited substantial contributions from the Confederated Tribes of Warm Springs, which made possible the construction of outbuildings around the observatory dome. The acquisition of telescopes and scientific equipment was largely funded by grants from the National Science Foundation and other national funding agencies.

In 2011, the observatory had three large reflector telescopes, with mirrors of thirty-two inches, twenty-four inches, and fourteen inches in diameter, housed in three domes. Observational work under Director Greg Bothun focuses on low-luminescent galaxies, with remote high-speed digital connections between the observatory and the University of Oregon campus and other astronomical data centers.

From its early years, PMO followed Ebbighausen's ideal of a "friendly" astronomical facility, emphasizing both research and public education. In the 1970s, UO Professor Jim Kemp organized a volunteer group, the Friends of Pine Mountain Observatory, for this mission.

A group of Bend-area volunteers has supported the PMO's public outreach, offering on-site tours and viewing nights between late May and the end of September, weather permitting, and hosting "star-parties" at the site. School visits are encouraged, and during the school year a program of electronic classroom outreach is available to schools throughout Oregon.

Visitors to PMO are invited to use the 24-inch and 14-inch telescopes, a set of "Big Eye" binoculars, and an array of smaller scopes, and they can bring their own viewing equipment. There is a gift shop, the Phil Brogan Library, and an unimproved U.S. Forest Service campground adjacent to the observatory for visitors who want to combine serious stargazing in uncommonly clear air with camping out under the stars. 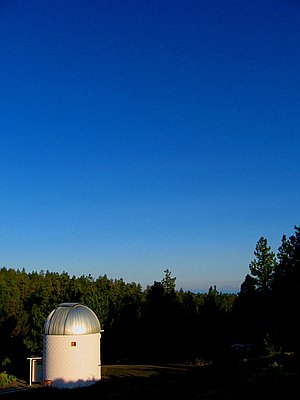 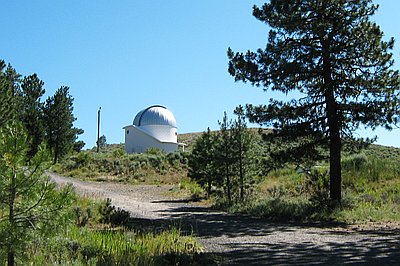 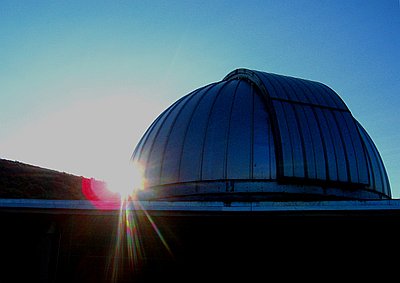