Our Mountain, a name given by local residents to a previously unnamed peak, is located 5.4 miles west-southwest of O'Brien in the Siskiyou National Forest. The mountain is bounded by the South Fork of Rough and Ready Creek on the west and north, Whiskey Creek on the south, and the West Fork of the Illinois River on the east. Biscuit Hill and Buckskin Peak are to the west, Oregon Mountain is to the south, Lone Mountain and Gilligan Butte are to the east, and Josephine Mountain is to the north. The summit, at 3,937 feet, is a southwest-to-northeast-trending ridge about six miles long and three miles wide.

In July 1994, a lightning bolt started a forest fire (named the Rough and Ready fire) on the mountain. Nancy Lyford reported the fire's location, but the response was delayed because the mountain was unnamed. Local residents had called the mountain "Our Mountain" for many years, and Lyford and her husband Gordon were inspired to make the name official. They got in touch with the U.S. Forest Service and Josephine County, circulated a citizens petition, and submitted a Domestic Geographic Name Report to the Oregon Geographic Names Board (OGNB). The board approved the name on June 26, 1999, and the U.S. Board on Geographic Names made it official on June 8, 2000.

Our Mountain is not a timber-producing area due to the type of mineral soil found there. The soils contain elevated concentrations of metals, such as iron, nickel, chromium, and magnesium. The serpentine soils are toxic to many common plants but support scores of rare and endemic wildflowers and brush and conifer tree species. Our Mountain contains important U.S. Forest Service botanical areas. A dirt road runs along the ridge line of the mountain, serving as a firebreak and giving access to mining claims with sample pits for nickel exploration. Mining on the mountain, however, has never been economically feasible. 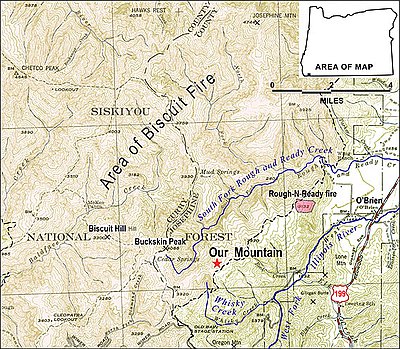 On July 13, 2002, a series of electrical storms passed over southwestern Oregon's Siskiyou Mountains. That afternoon's barrage of lightning strikes ignited five separate fires inside the vast Kalmiopsis Wilderness. Burning for well over four months in remote and rugged terrain, by early August the fires had grown together into a …