Oregon white oak, Quercus garryana, grows along the Pacific Coast from southern California north through the interior valleys of western Oregon and the Puget Sound Lowland to southwest British Columbia, where it is called Garry oak. It also grows in the Columbia River Gorge, in eastern Oregon, and along the Columbia River to the east slopes of the Cascade Mountains in Washington.

David Douglas named the tree in honor of Nicholas Garry, secretary and later deputy governor of the Hudson's Bay Company, who was helpful to Douglas when he was in western North America in 1826 looking for native plants suitable for horticultural introduction in Great Britain. The specimen on which Douglas based the name is from a tree “on the plains near Fort Vancouver,” the Hudson's Bay Company post along the Columbia River.

The Oregon white oakis one of two species of native deciduous oaks in Oregon. The other, California black oak, Q. kelloggii, grows from southern California to as far north as Lane County. It grows in moister sites than white oak, which requires drier conditions where competition with other species, such as conifers, is somewhat reduced.

The largest known tree, found in California, is eight feet in diameter and 120 feet tall. One 27-inch diameter trunk was 251 years old; larger trees may exceed 400 years. Establishing the age of trees is sometimes difficult because older trees are often hollow, with annual rings in the trees’ center missing.

When David Douglas first came across the oaks, they were part of the vast woodland savannas of the Puget Sound Lowland and the Willamette Valley. He was among the first to record how Native Americans burned the savannas to keep the area open for hunting and to enhance the growth of edible herbaceous plants, such as camas, and the collection of wasp nests whose larvae people roasted and ate.

Regular, light burns kept down competition from encroaching conifers and their own seedlings, resulted in widely scattered old savanna-form oaks. When European settlers arrived in the region, the fires were no longer set, allowing young trees to form forest-like thickets of tall spindly trees. Other factors include the disappearance of acorn-eating grizzly bears. The introduction of the alien wild turkey in the 1970s will likely have the same effect on oak recruitment.

Oregon white oak is host to six different gall-forming insect parasites and a mistletoe, Phoradendron villosum, often sought after as a winter solstice and Christmas decoration. Speckled galls are round, thin-walled, hollow ping-pong-ball-sized structures on leaves that make a delightful popping sound when stepped on; and the tannin-laden tissues of the large, dark, oval- or kidney-shaped bullet galls on twigs and branches can be used to make ink.

In the fall, after leaves have fallen, the trees take on a ghostly gray appearance when their lichen epiphytes are visible. Oregon white oaks in the Willamette Valley have over one hundred lichen species that grow on trunks, branches, and twigs.

Native Americans used the acorns as a staple food source, eaten raw, or roasted, dried, cooked as a mush, soup, or bread, usually after treating acorns to remove the bitter tannins, a labor-intensive process. In the past, the oak was logged for its hard, strong, and close-grained wood, for use in ship-building, furniture, cabinetwork, and interior finishing. White oak also was used as durable fence posts because of the heartwood's rot resistance and its splitability, as demonstrated by a hundred-year-old fencepost near Eugene. Sadly, it also makes excellent firewood.

Because of these factors plus land clearing for agriculture, urban development, fire protection, and similar modern activities, Oregon white oak habitat, specifically the savannahs, has been lost throughout much of its range. Oregon must undertake serious conservation and restoration efforts if it wants to continue to enjoy the aesthetic and ecological benefits this species and its ecosystem provide. 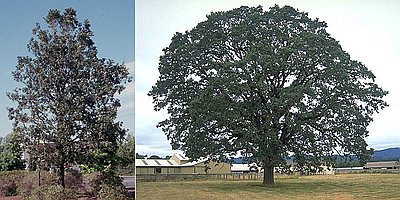 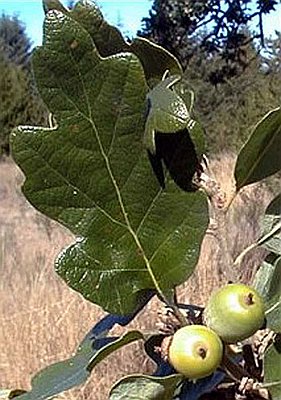 Indian Use of Fire in Early Oregon

Anthropogenic (human-caused) fire was a major component of the Native system of land and resource management in what is now Oregon. Of all the techniques used to manage food resources and manipulate food-producing environments, controlled burning was the most widespread and effective in most environments on the West Coast.