Indian Use of Fire in Early Oregon

Anthropogenic (human-caused) fire was a major component of the Native system of land and resource management in what is now Oregon. Of all the techniques used to manage food resources and manipulate food-producing environments, controlled burning was the most widespread and effective in most environments on the West Coast.

In Oregon, the evidence for anthropogenic burning by Indians is usually indirect and piecemeal, because the practice was actively discouraged by non-Natives and almost disappeared in the first century after resettlement. It is seen most clearly in early and mid-nineteenth century records that document open prairies, where there are now forests, and woodlands that had little underbrush. Early historical records—from botanist David Douglas in 1826, for example, and Henry Eld and George Emmons of the 1841 U.S. Exploring Expedition—are important sources that document Indians using fire in the Willamette Valley. As Douglas observed while traveling south of present-day Salem on September 30, 1826, "Most parts of the country burned; only on little patches in the valleys and on the flats near the low hills that verdure is to be seen. Some of the natives tell me it is done for the purpose of urging the deer to frequent certain parts, to feed, which they leave unburned and of course they are easily killed. Others say that it is done in order that they might better find wild honey and grasshoppers, which both serve as articles of winter food."

Since the mid-1900s, researchers have collected traditional ecological knowledge (TEK) on fire use. It is likely that detailed knowledge about how to use fire and manage its ecosystemic effects traditionally was controlled by a few specialists. Most burning took place in late summer, after harvest, probably as both a "cleaning up" process and to prepare the land for the next year. Sharp borders of many historic prairies suggest the use of carefully controlled fire, and most observed fires were of low intensity to prevent deleterious effects.

Lightning fires are not common in Pacific Northwest lower elevations; and in the absence of regular firing, trees have invaded and eliminated most nineteenth-century prairies. Concerning the land, there may even have been an aesthetic that favored open meadows and forests cleared of underbrush. In 1979, anthropologist Jay Miller recorded a lament from a Methow elder: "When my people lived here, we took good care of all this land. We burned it over every fall to make it like a park. Now it is a jungle." In 1930, Frank Drew, a member of the Coos tribe, said that fire "helped create and maintain a 'fine and beautiful open country.'"

Perhaps the most important effect of the controlled use of fire on wild food plants was to change the normal sequences of plant succession, from late stages dominated by wood species in which nutrients were locked up to early stages that favored short-lived forbs and berries. Fire also removed weedy competition and refuse, killed insects and pathogens, and laid down a fertilizing layer of ash.

Anthropogenic fire was most common in the Willamette, upper Umpqua, and Rogue Valleys; in high-elevation huckleberry areas; and in eastside Ponderosa forests, the traditional homelands of Kalapuya, upper Umpqua, Takelma, and Sahaptin peoples. In the western valleys, fire maintained open oak savannah prairies, an endangered ecosystem that supported many plant and animal species that are now extirpated or rare in their former ranges. Programs of prescribed burning similar to those practiced by Oregon's first peoples are now being used to save this biological heritage.

In the twenty-first century, prevailing ideas about West Coast Natives' relations to the land and its resources have changed. In the Pacific Northwest, the stereotype was of a land of plenty, where salmon was available in abundance and was the most important food resource. The hunting-gathering and fishing subsistence modes of Northwest Natives were implicitly and negatively contrasted to the agricultural systems of their EuroAmerican successors, who tilled the soil, planted seeds, and tended domesticated plants and animals. This view ignores traditional practices and perpetuates a stereotype of "primitive" versus "civilized."

New data, however, demonstrate that Oregon and West Coast Natives possessed a land and resource management system that was complex, sophisticated, internally consistent, and based on an underlying principal of coexistence with nature. Salmon was not as predominant a food in most Native diets as once thought, and people used a diverse range of wild resources, particularly plant species. Fish runs were unpredictable, and food resources might not last through an entire year, leading to malnutrition and even starvation in late winter and early spring.

Most important, West Coast peoples manipulated their environments and tended their wild foods in ways that were subtle, diverse, and effective in maximizing production. Plots of wild food plants might be tended, weeded, fertilized, pruned, and selectively harvested. Tubers were reburied and single plants transplanted, without planting from seed or tilling the soil. (Native tobacco is the only known example of a crop planted from seed.) Anthropogenic burning was far and away the most important of these nonagricultural techniques. The natural world was not to be conquered or exploited, but worked with and encouraged to maximize its potential. 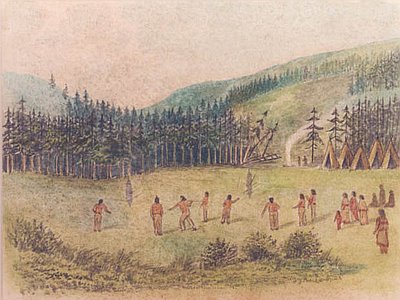 Turner, Nancy, and Douglas Deur, eds. Keeping it Living: traditions of plant use and cultivation on the Northwest Coast of North America. Seattle: University of Washington Press, 2005.

Hazelnuts, also called filberts, have provided food for Indigenous peoples in the Northern Hemisphere since the glacial age. Two varieties are important to Oregon. Corylus Cornuta var. californica grows wild in the state and is now planted for erosion control and wildlife habitat. C. avellana L., which settlers brought to Oregon …

Oregon white oak, Quercus garryana, grows along the Pacific Coast from southern California north through the interior valleys of western Oregon and the Puget Sound Lowland to southwest British Columbia, where it is called Garry oak. It also grows in the Columbia River Gorge, in eastern Oregon, and along the Columbia …