Founded in 1969, the Oregon Country Fair (OCF) is a self-sustaining annual gathering held on the second weekend of July in Veneta, about fifteen miles west of Eugene along the Long Tom River. It is a celebration and exposition of alternative lifestyles, products, and creative expressions. About 3,000 people attended the first fair; organizers estimate approximately 45,000 people attend the current fair each year.

Under its original name, the Oregon Renaissance Faire was first staged as a fundraising event for an alternative school. As early as 1970, the fair relocated to its current site. In 1982, the OCF board of directors established a nonprofit organization, by then called the Oregon Country Fair, and purchased a wetland that is an integral part of the organization. The board of directors maintains a detailed land-use management plan for the site, most recently updated in March 2010. During the winter, much of the land is flooded.

The Oregon Country Fair soon expanded beyond its original fund-raising purpose and has become a popular art and music festival attended by thousands of people; but it has retained its philanthropic roots—the OCF has distributed over $600,000 in the last fifteen years to non-profits. It has also served as a central expression of some Oregonians’ dedication to unconventional, intentional, and earth-friendly living practices and counterculture. The fair is officially both alcohol and drug free. Still, it is familiarly known as a hippie gathering, a time to pull tie-dyed shirts out of the bottom drawer and let your hair down. The fair celebrates music, dance, art, crafts, international foods, and the human body. In conformance with Oregon law, there is no nudity during its public hours, but the fair is colloquially noted for its lax orientation to clothing.

The fair is run by volunteer crews that persist year after year. To become one of the fair workers, it is usually necessary to make a connection through a person on one of the work crews, particularly around the eighteen stages that offer entertainment. The fair also offers a juried process for selecting crafts booths. The OCF now boasts a paid manager and a handful of other full- and part-time staff members.

During the three-day fair, environmental, peace, and justice activities and information are available, and there is fundraising for outreach to youth and children around these issues. The Culture Jam, for example, is held on OCF land for youth interested in creativity and social change.

The Oregon Country Fair has received the City of Eugene’s Bold Steps Award for its attention to reducing its carbon footprint and holding a zero-waste event. 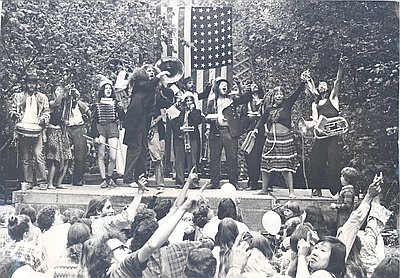