The Oregon Citizens Alliance was a conservative activist group and political action committee that rose to prominence in the late 1980s as part of a national backlash against the gay civil rights movement. As one of OCA’s founders, Executive Director Lon Mabon was considered a voice in the so-called culture wars of the early 1990s. Mabon was also the chair of the United States Citizens Alliance, the umbrella group for the OCA and its sister organizations, which was part of his larger effort to expand his fight against what he called the “homosexual political agenda.” He founded the OCA as part of a campaign designed to unseat Republican Senator Robert Packwood with a fundamentalist Baptist minister named Joe Lutz. Lutz surprised pundits by winning 42.3 percent of the vote in the Republican primary.

The Oregon Citizens Alliance is best known for sponsoring ballot initiatives that would undo protections against the discrimination of Oregonians who were gay. In 1988, the OCA collected enough petition signatures for Ballot Measure 8, which was designed to overturn Governor Neil Goldschmidt’s executive order banning discrimination in state government based on sexual orientation. The measure won by a 5.4 percent margin. It also prohibited job protections for gays in state government. In 1990, the OCA placed before the voters Ballot Measure 10, which would have required parental notification before a minor was permitted to have an abortion. The measure was defeated by 52.1 percent of the votes.

Ballot Measure 9, OCA’s largest campaign, was on the ballot in 1992. The measure would amend the Oregon constitution to recognize “homosexuality, pedophilia, sadism and masochism as abnormal, wrong, unnatural, and perverse." It would also prevent any “special rights” for homosexuals and bisexuals. Part of a national movement to turn back civil rights protections for sexual minorities, the measure was a response to what Republican presidential candidate Pat Buchanan referred to in 1992 as the “culture wars.”

The OCA’s call for “no special rights” for gays, as opposed to framing the issues as civil rights or equal rights, had a wide appeal. The campaign in support of Measure 9 compared homosexuality to bestiality and pedophilia and galvanized a coalition of opposition groups from various faith communities, ethnic minorities, and LGBT groups.

Oregon saw a wave of anti-gay hate crimes in 1992, including two murders in Salem, that some believed were inspired by the OCA’s rhetoric. Hattie Mae Cohens, a twenty-nine-year-old lesbian, and Brian H. Mock, a forty-five-year-old gay man were killed in a firebombing on September 26. The four people charged in the crime were believed to be part of the racist skinhead subculture.

Measure 9 was defeated with 56 percent of Oregonians voting against it; more than 638,000 Oregonians voted yes. A similar anti-gay measure passed the same day in Colorado. The Colorado measure was thrown out by the U.S. Supreme Court (Romer v. Evans, 1996) as unconstitutional, as was Oregon’s Measure 8 in 1992. In the Colorado case, an amicus brief was filed by Oregon Attorney General Ted Kulongoski.

After the defeat of Measure 9, the Oregon Citizens Alliance targeted twenty-eight small communities with similar measures and was successful in all but two, Corvallis and Gresham. The state legislature overturned the measures in 1993 by passing HB 3500, which prohibited local laws that "single out citizens or groups of citizens on account of sexual orientation." HB 3500 was upheld by the Oregon Supreme Court in 1995. The OCA responded with Measure 13 in 1994, which would have restricted public library access to materials dealing with homosexuality. The measure failed with only 48.5 percent of the vote.

In 1996, Lon Mabon ran for the Oregon Senate seat against Gordon Smith and came in second in the Republican primary. In the general election, the Oregon Citizens Alliance backed Smith, who won. In 2000, there was a successful lawsuit against the OCA stemming from a 1992 incident in which OCA communication director Scott Lively forcibly ejected a gay-rights activist from an OCA event. The suit contended that the OCA hid its assets to avoid paying the settlement.

In 2000, the OCA sponsored a second Ballot Measure 9 that would have prohibited public schools in Oregon from “encouraging, promoting, or sanctioning homosexual and bisexual behaviors.” The measure failed with only 47.1 percent of the vote. In 2002, Mabon served a short term in jail for not complying with a judge’s orders to produce financial statements relating to the judgment against him for the 1992 incident. Later that year, Mabon again ran for the Oregon Senate seat as a member of the Constitution Party and received 1.7 percent of the vote.

Mabon and Lively attempted to revive the OCA in 2007, but their efforts to place anti-gay measures on the 2008 Oregon ballot were unsuccessful. Lively, the author of The Pink Swastika: Homosexuality in the Nazi Party, has more recently promoted anti-gay legislation in Russia and Uganda. His Abiding Truth Ministries has been listed as a hate group by the Southern Poverty Law Center. 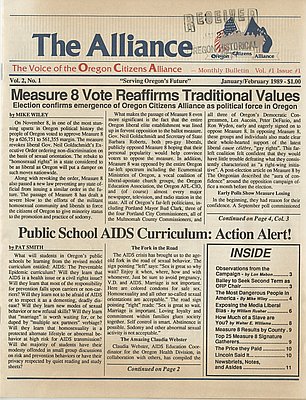 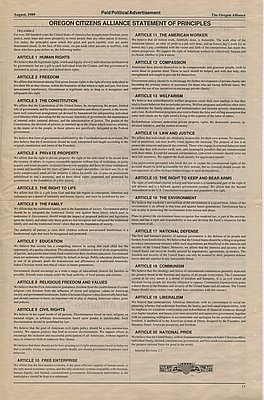 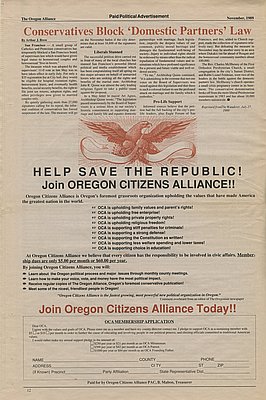 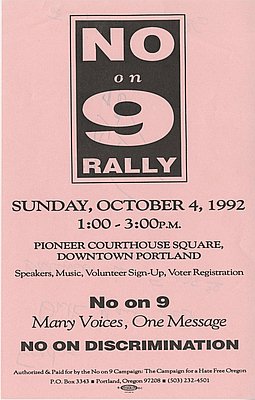 Kyle Cassidy, "God, Gays & Glasnost: The Oregon Citizens Alliance is back, and banking on Soviet émigrés for its revival," Willamette Week (February 6, 2007).

Established in 1996, Basic Rights Oregon was the first statewide political organization in Oregon to work on the behalf of LGBTQ rights (lesbian, gay, bisexual, transgender, queer). Its mission is to ensure that LGBTQ Oregonians “experience equality by building a broad and inclusive politically powerful movement, shifting public opinion, and …

Before New York’s Stonewall Riots in 1969, the history of gay rights in Oregon, as in the United States generally, was one of curtailment. For example, in the nineteenth century when Oregon formed as a territory and then a state, lawmakers adopted a statute criminalizing sodomy, whether consensual or not. In response …