The wolf named OR4 was the father of the first successful breeding pack in Oregon for many decades. The object of intense scrutiny from wildlife managers, ranchers, and environmentalists, he wore five different tracking collars before his death in 2016. His offspring founded many of the packs that now live in the state.

Wolves (Canis lupus) were a part of the characteristic fauna of present-day Oregon for thousands of years. In the mid-nineteenth century, however, EuroAmericans who settled in the area began killing wolves and other predators to protect their livestock. In 1843, a group of settlers gathered in Champoeg at what was known as the Wolf Meetings to set bounties for bears, mountain lions, lynx, and wolves and to form a Provisional Government, a key step toward statehood. This antipathy toward wolves, arguably a founding principle of the State of Oregon, reached its climax in 1947, the year the last bounty was paid out on a wolf. Anti-predator landowners had succeeded in eradicating the species from the state.

By the 1970s, in the wake of the first Earth Day in 1970 and the passage of the Endangered Species Act in 1973, the national opinion on wolves had changed, with many now believing that eradicating wolves from the West had been a mistake. In the mid-1990s, conservationists moved wolves from Canada and northern Montana to Yellowstone National Park and wilderness areas in Idaho. Biologists were uncertain how well they would do or how quickly their population would expand, but the wolves were tougher and more fecund than expected. By 1999, the first wild wolf had found its way to Oregon. The state was not ready to manage the species, however, and the Fish and Wildlife Service captured the animal and sent it back to Idaho in a crate.

From 2006 to 2017, wildlife biologist Russ Morgan served as the wolf coordinator and monitor of the Oregon Department of Fish and Wildlife (ODFW). He managed the in-migration of wolves from Idaho and the establishment of several wolf packs in northeastern and southern Oregon. Working with the U.S. Fish and Wildlife Service, ODFW placed tracking collars on wolves and worked to ensure that the species was established in the state, while also trying to minimize the conflicts with livestock that had sealed the predator’s fate in the twentieth century.

Perhaps no single wolf was as well-known to ODFW as OR4, a large black male who was representative of the delicate balance necessary in wolf management. His origins are unknown, but he almost certainly moved into Oregon from Idaho. OR4 became the breeding male of the first reproducing wolf pack in the State of Oregon.

Russ Morgan tracked OR4 by using reports of people who heard wolves howl in the rugged landscape of Wallowa County in 2009. He captured the wolf and fitted him with a collar in early 2010, when OR4 weighed 115 pounds—the largest wolf ever captured in Oregon—and was in excellent health. It was the beginning of a long and close association. Morgan and his colleagues would ultimately put five separate collars on OR4 between 2010 and 2016. As an active hunter and provider for many offspring, OR4 was very hard on collars.

OR4 spent the majority of his time hunting elk and other wild game, but he did occasionally target livestock, a habit that would get him and his pack members in trouble. Two members of his pack were killed to reduce the pressure on livestock in May 2011, and ODFW determined that OR4 had to be killed that October. Morgan and his assistant, Roblyn Brown, were actively hunting him when they received a text message that a judge had stayed the action due to a lawsuit from Cascadia Wildlands, the Center for Biological Diversity, and Oregon Wild. OR4 escaped death by only a few minutes.

The lawsuit was eventually settled in May 2013, and the agreement spelled out under what circumstances wolves could be killed by state officials in Oregon. Those terms have shifted somewhat over the years, but in general wolves must kill more than one animal and ranchers must take nonlethal measures to stop the depredations. OR4 was, in essence, the test case that shaped wolf policy for the state.

OR4’s offspring grew up and spread out across the state, founding seven additional packs, including the Wenaha. One of his sons was the famous OR7, named Journey by Oregon Wild because his collar showed that he had taken a trip of some thousand miles from his birthplace in the Wallowas through Klamath and Jackson Counties into California. OR7 was the first wild wolf documented in California since the 1920s.

In the spring of 2016, OR4 was approximately ten years old, which is very old for a wild wolf. When his pack began to kill livestock again, he was eligible for what is known as lethal control under the rules agreed to in the settlement. A local rancher requested his removal, and ODFW staff killed him, his mate, and his offspring on March 31, 2016. Morgan ordered their deaths as a matter of species management, but he also said that it was an emotionally charged decision. “I don’t have any remorse for killing them,” he said, ‘but I am sad they aren’t here.” 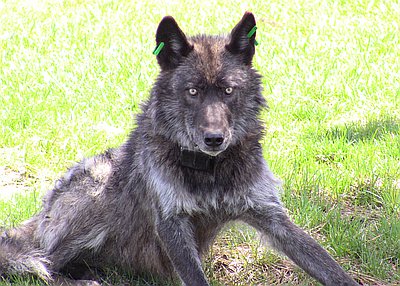 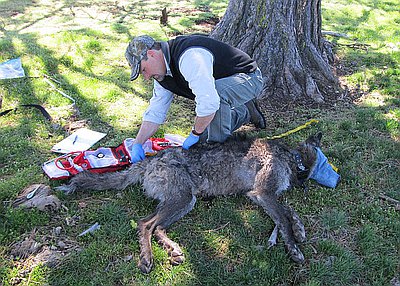 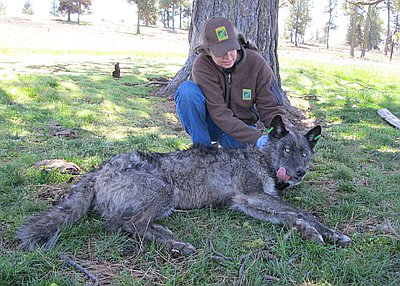 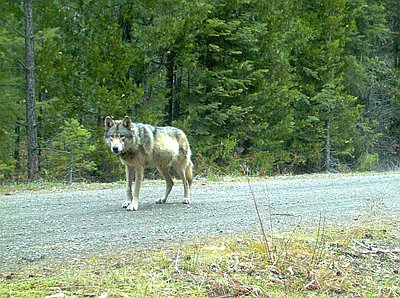 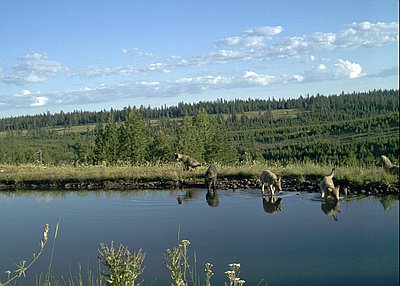 OR4 with new collar, 2011
Courtesy Oregon Department of Fish and Wildlife, https://creativecommons.org/licenses/by-sa/2.0/

“Updated biological status review for the Gray Wolf (Canis lupus) in Oregon and evaluation of criteria to remove the Gray Wolf from the List of Endangered Species under the Oregon Endangered Species Act.” Oregon Department of Fish and Wildlife, 2015. http://www.dfw.state.or.us/agency/commission/minutes/15/11_november/Exhibit%20B_Attachment%203_Updated%20Biological%20Status%20Review.pdf

“Don't Stop Believing: The Journey of OR-7.” Oregon Wild. http://www.oregonwild.org/wildlife/wolves/the-journey-of-or7

The American Beaver (Castor canadensis) is often called “nature’s engineer” because of its practice of building dams in streams and rivers. Nearly wiped out in much of their historic range by early fur trappers, beavers have been restored to many Oregon waters because of improved management, awareness …

The rattlesnake is the only dangerously venomous reptile in Oregon. Among the state's native wildlife, few other animals generate as many fears, false perceptions, and tall tales. In reality, however, few people see rattlesnakes in the wild. They want to be left alone and will never advance toward a human. …

Scientists believe that the ancestors of today's horses evolved in North America 3.5 million years ago. Those animals became extinct in the Americas at least 11,000 years ago, and it wasn’t until the early sixteenth century that Spanish explorers and missionaries reintroduced horses into the American West. Within a hundred …