Operation Red Hat was the label the American military applied broadly to its program to better secure the nation’s chemical weapons, including nerve gas, by isolating them and initiating their destruction during the late 1960s and early 1970s. In 1970, the military decided to move some of those weapons to Oregon, where similar weapons were stored at the Umatilla Army Depot west of Hermiston. Senator Henry "Scoop" Jackson, a Democrat from Washington State, got public credit for the ultimate reversal of the decision, but Governor Tom McCall led the public opposition.

The connection of Operation Red Hat to Oregon began in the western Pacific, where chemical weapons were secretly stored at Okinawa. Okinawa had been a major staging area for the Vietnam War during the late 1960s, even as the Japanese government sought to regain the island lost to the United States following World War II. Attention to Okinawa increased in 1969 when news of a leak in the stockpile of nerve gas became public. Japan demanded that the weapons be moved.

Faced with the diplomatic need to act, President Richard Nixon’s administration decided to store the weapons at the Umatilla Army Depot, with the shipments being transported through Washington State. The plan had significant public relations risks, since just two years earlier, in 1968, there had been extensive publicity regarding the military's errant nerve gas experiment that killed 6,400 sheep in Skull Valley, Utah.

Governor McCall initially assented to the army’s plan, convinced that moving the weapons was both militarily important and legally inevitable, and the Defense Department announced his support. Influenced by his close advisor Ron Schmidt and following some intensive research that showed that the nerve gas was sufficient to kill the world’s population twice over, McCall reversed his position the next day.

The governor's public opposition to the plan was politically popular, and he was able to obtain 62,000 signatures on a petition that he hand-delivered to the White House. One of McCall’s notes to Nixon reflects his rhetorical skill and the complexity of the times: "To say that the citizens of Okinawa...should not be subjected to the proximity of these inherently dangerous and frightening chemicals is an incredible statement when you go on to say that it is all right for the citizens of Oregon to suffer this same proximity."

Nixon ignored his pleas, and the military continued with its plan. McCall unsuccessfully appealed to Surgeon General Jesse Steinfeld, who was responsible for approving the shipments, and to Vice President Spiro Agnew. A joint judicial appeal by McCall and Washington Governor Dan Evans, asserting that the states could not meet the safety and security requirements of the plan, went nowhere. Despite extensive publicity, McCall’s efforts seemed ineffectual, even though he was joined by Evans, the Oregon congressional delegation, and Washington Senator Warren Magnuson.

The turning point against the Umatilla plan came when the powerful, strongly pro-military Scoop Jackson determined that accepting the weapons in the Northwest could affect his popularity in the 1970 election. His close relationship with Nixon on military issues enabled him to persuade the administration to change the plan. When Jackson was notified of Nixon's decision, he claimed credit for the change.

Operation Red Hat continued, with the isolated Johnston Atoll, southwest of Oahu, named as the new target site. The American military publicized the policy as a logistical success, even creating a promotional film portraying the soldiers in red helmets as they efficiently moved the weapons to Johnston Atoll. For people living in Hawaii, Vanatua, New Zealand, and other Pacific islands, the policy remained controversial. Diplomatic opposition intensified in 1990, when the George W. Bush administration decided to dispose of chemical weapons from Germany at Johnston Atoll. The last remnants of the weapons were incinerated in 2000. 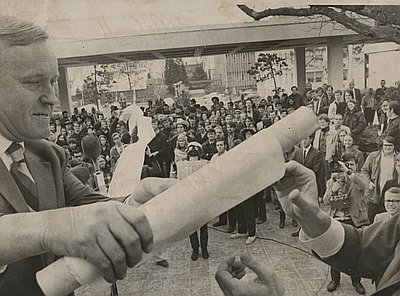 Gerald R. Ford Library: documents can be accessed that are found in Box C5, folder “CW & BR in Okinawa, Calendar of Documents” of the Melvin R. Laird Papers. https://www.fordlibrarymuseum.gov/library/document/0375/1684150.pdf

In 1940, the U.S. Army identified twenty thousand acres straddling the Umatilla and Morrow county line, eight miles west of Hermiston, as the site for a military munitions and supply depot. The Umatilla Army Ordnance Depot stored and supplied munitions to the army until the early 1990s. Between 1962 and 1969, …