The John A. and Helen Moore House is one of the earliest houses built in present-day Sherman County and the only Italianate-style residence in the region. Built in 1882 on what is now Highway 97, about three and a half miles south of Moro, the house retains many original features, including hand-painted interior transoms and wood graining, a plaster decorative medallion in the entryway, and some original wallpaper and furniture.

John A. Moore married Helen Vincent in 1856 and they had two sons, Leon Vincent Moore and Ernest Hamilton Moore. The family emigrated from New Hampshire and Illinois to Cherokee, Butte County, California, in the 1860s and moved to present-day Sherman County in 1882. As land became available for raising livestock and farming, six families—the Moore, Vinton, Cushman, Rollins, Ruggles, and Rutledge families—established homesteads and timber culture claims. John Moore and his brothers Henry and Rufus were stockmen, wheat farmers, and businessmen and were instrumental in the early development of Grass Valley and Moro.

In 1882, John Moore built a single-bay Italianate farmhouse of full-cut timbers and 11-foot ceilings. The house had two porches, four bedrooms, a parlor, a dining room, a kitchen, and a separate summer kitchen. Indoor transoms were painted in a dark brown spider-web design, and there was one bay window. It may have been the first plastered house in the county. Most of the original outbuildings are gone.

The first major alteration to the house occurred in 1929 when Ernest Moore had the large house made into two apartments for his sons, Roscoe and Collis. A door was put up to separate the downstairs bedroom from the parlor, and that bedroom became the kitchen. A wall was moved to enlarge the dining room and the kitchen pass-through was closed. One pantry became part of the kitchen. The summer kitchen was removed when it was no longer needed.

David Moore, Collis and Dorotha Huntley Moore’s son, was the fourth generation of the family to live in the house. His wife Millie restored the house in the 1970s and 1980s, removing the added door and preserving many of its original qualities and some of Helen Moore's quilt tops. Their children David and Julie were fifth generation residents. The house, known as the John and Helen Moore House, was listed on the National Register of Historic Places in 1994. 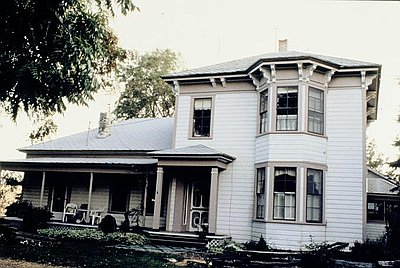 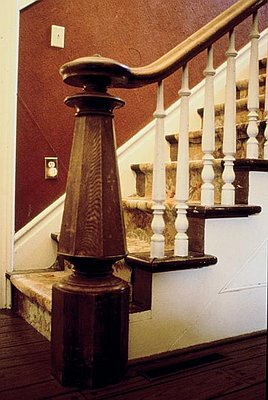 Ogle, Geo. A. & Co., Publishers & Engravers, Standard Atlas of Sherman County, Oregon including A Plat Book of the Villages, Cities and Townships of the County. Chicago. 1913.