Minnie Myrtle Miller, the "Poetess of the Coquille," was born Theresa Dyer in Brookville, Indiana, on May 2, 1845. She was the daughter of Aaron and Sarah A. Dyer, who journeyed with their children from Ohio to Oregon in 1859 and settled on a farm in Curry County, not far from Port Orford.

A skilled horsewoman and an expert shot with a rifle, Theresa Dyer also earned praise for her writing. Using the name "Minnie Myrtle," she submitted poetry and prose to Oregon newspapers. Following her marriage and until her death at age thirty-seven, she wrote as "Minnie Myrtle Miller," sometimes signing as "M.M.M."

Critic John B. Horner acknowledged in Oregon Literature (1902) that this "sweet singer of the Coquille" had "the quick ear for the musical" and "showed unquestioned genius" as a poet. Had she lived a full life, Horner believed, "she would have been known as and recognized as one of the sweetest songsters of the West." In History of Oregon Literature (1935), Alfred Powers devoted a chapter to Minnie Myrtle and included eleven of her lyrical poems and two of her prose essays, all published in Oregon newspapers.

Minnie Myrtle's life was marked not only by her talent but also by her troubled eight-year marriage to Joaquin Miller. In 1862, her poetry attracted the attention of Cincinnatus Hiner Miller, the editor of Eugene City's Democratic Register, who years later fashioned himself as Joaquin Miller, the "Poet of the Sierras." After a whirlwind courtship, the two were married on September 12, 1862, in Curry County. In Memorie and Rime (1884), published after Minnie Myrtle's death, Joaquin Miller wrote: "I arrived on Thursday. On Sunday next we were married! Oh, to what else but ruin and regret could such romantic folly lead."

After a move to California, where Minnie Myrtle and Joaquin Miller wrote for the San Francisco Golden Era, the couple settled in Grant County, where their "romantic folly" unraveled. Minnie Myrtle Miller claimed that her husband had failed to provide for their three children; Joaquin Miller charged that Minnie Myrtle was an unfit mother and that the youngest child, Henry, was not his. He requested custody of the older children, Maud and George.

On April 19, 1870, the court granted a divorce, giving Minnie Myrtle care of Henry and her mother custody of Maud and George, with Joaquin to pay support. Soon Joaquin left Oregon and later sailed to England, where the London publication of Songs of the Sierras (1871) brought him international fame.

Impoverished and frequently ill, Minnie Myrtle was assisted by Oregon writers Belle W. Cooke, Ella Higginson, and Frances Fuller Victor. Editor Abigail Scott Duniway published Myrtle's poetry and prose in The New Northwest, encouraged her to take the lecture platform, and began a campaign in the summer of 1871 for the deserted wife and children of "an inconstant lord." But Minnie Myrtle's desire for connection with Joaquin Miller was not extinguished, and in poetry, essays, and lectures she attributed Miller's behavior to literary talent and artistic temperament.

On May 15, 1882, Minnie Myrtle Miller died of pneumonia and consumption in the New York Infirmary for Women and Children. She was buried in Brooklyn's Evergreen Cemetery. In Memorie and Rime, Joaquin Miller praised her talent and noted that she had entrusted "all her papers" to him before her death. The papers never surfaced, and no complete collection of her poetry and prose was ever published. 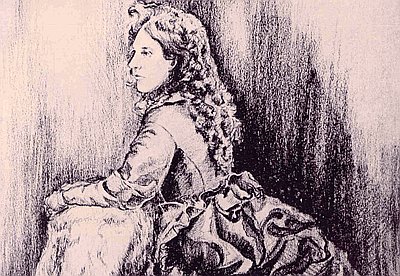