The City of Lebanon, with a population of about 17,000 in 2020, is located along the South Santiam River on the eastern edge of the Willamette Valley, close to the Cascade Range and less than twenty miles from Albany and Corvallis. The city is known for its walking and biking trails, waterside parks, and small-town atmosphere. It is a center for medical education and services and home to Entek International, a producer of battery separator materials and extruders.

The area surrounding Lebanon was the territory of the Louis Band of the Santiams, whose numbers were diminished from introduced diseases by the mid-nineteenth century. In 1855, the band of fewer than a hundred people ceded to the U.S. government its rights to the land and moved to a temporary reservation, just south of today’s downtown, where they awaited removal to the Grand Ronde Reservation in 1856.

White settlers Jeremiah and Jemima Ralston bought a squatters’ cabin from William Hawk and Thomas Morgan in 1847, staked a claim, and built a log house near the Willamette River at what is now Ralston Park. They built a store at today’s Main and Oak Streets, a stop for miners on their way to the California gold fields. A village grew up around the store, and in 1855 the couple filed a plat for the town, naming it for Jeremiah’s birthplace of Lebanon, Tennessee. They also donated land for the Santiam Academy, a school run by the Methodist Episcopal Church until 1906.

In 1859, Lebanon became a stop on an important trade route when a local expedition, searching for a way to drive cattle to central Oregon, found what would be called Santiam Pass. Five years later, Linn County stockmen incorporated the Willamette Valley and Cascade Mountain Road, which became the Santiam Wagon Road. Stockmen and travelers relied on the toll road, which was eventually replaced with U.S. Highway 20, running through Lebanon as Main Street.

During the early decades of American settlement in the valley, moving goods and people was more efficient by water than by land. The South Santiam River proved too shallow for big boats, and the only steamboat that reached Lebanon ended in failure in 1871. In 1872, construction began on a canal meant to carry barges loaded with farm and timber products and other goods from Lebanon to Albany; but the river flowed too swiftly for upstream shipping, and downstream shipping declined when the Albany–Lebanon Railroad was completed in 1880. The canal is still in use, running through Lebanon backyards to provide water for Albany.

Railroads were a boon to Lebanon. The Albany–Lebanon Railroad carried passengers as well as goods and served as a branch of the Oregon & California Railroad’s north-south line through Albany. By the end of 1890, the Southern Pacific Railroad had taken over those lines, and in 1910 it rerouted the old Oregonian Railway through town.

Diversified farming and food processing flourished in the mid-Willamette Valley from the 1890s on. Lebanon-area farmers produced hops, flax, berries, vegetables, orchard fruits, walnuts, filberts, forage crops, honey, mohair, turkeys, and greenhouse flowers. Potato warehouses, prune and nut driers, a cheese factory, a creamery, and a cannery were constructed in the town. By 1907, Lebanon was a leading strawberry-growing area in the valley, and the first fair to promote the industry was held in the city in 1909. The Strawberry Festival has been an annual event ever since, offering the World’s Largest Strawberry Shortcake since 1931, although only one local strawberry field remained by 2019. The strawberry industry declined due to crop disease, competition from other regions, and especially the development of housing on the sandy loam soils near the river. The local grass-seed industry began in the 1920s, and Linn County led U.S. production by the 1930s.

Lebanon began to boom in the 1930s, partly because of the Spencer Cannery, built in 1935, but also because of developments in the wood-products industry. The local paper mill, which began in 1891 by making paper from straw, switched to using pulp from logs floated down the South Santiam River. By 1936, the mill had doubled in size.

The local wood products industry began to grow in about 1900, as the supply of timber in the upper Midwest became scarce, and Lebanon’s small mills made lumber, lath, boxes, doors, windows, stair parts, furniture, shingles, railroad ties, and excelsior. Sawmills were built along the Oregon & Electric Railroad, completed in 1932, and twenty new mills opened in the city from 1937 to 1942. Lebanon’s population swelled, and the city barely felt the Great Depression.

A bigger boom began in 1940 when Evans Products built what was said to be the biggest plywood mill in the world. World War II boosted the demand for plywood, and Lebanon’s population increased 116 percent from 1940 to 1950, from 2,720 to 5,873. In 1952, the plant, now called Cascade Plywood, began producing a composite board called Lebanite. Lebanon residents took to calling themselves Lebanites, and Cascade Plywood dominated the city’s economy.

The city began a slow decline in the 1970s, as big trees got scarcer and extraction more expensive. The paper mill shut down in 1980, the plywood mill closed in 1984, the Lebanite hardwood plant closed in 2004, and Weyerhaeuser shut down the last big mills in 2006 and 2007. Main Street was dominated by thrift stores and empty storefronts.

The city’s economy has since improved. Entek, founded in 1984, expanded its operations in 2019 and employed over 700 people. That same year, Lowe's warehouse became Lebanon’s biggest employer. The College of Osteopathic Medicine of the Pacific Northwest opened in 2011, the Edward C. Allworth Veterans’ Home in 2014, and Linn–Benton Community College’s HealthCare Occupations Center in 2017. Storefronts and houses are being renovated; brewpubs and other businesses are thriving; and Cheadle Lake, once the log pond for the plywood mill, is a city park. Lebanon, in the twenty-first century, is experiencing a renaissance. 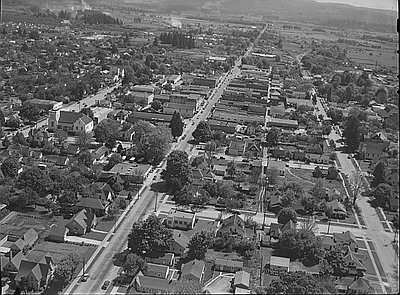 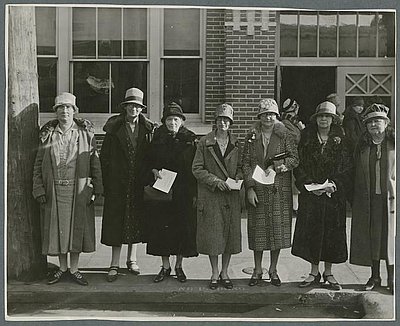 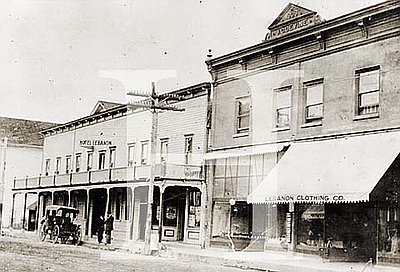 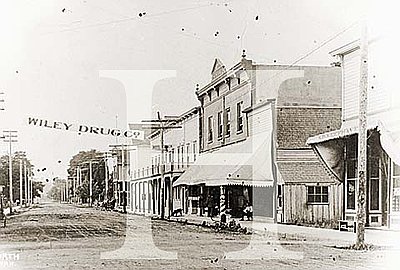 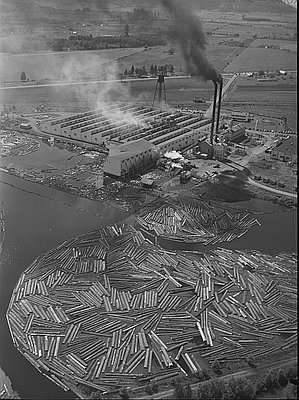 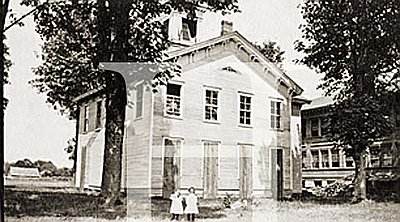 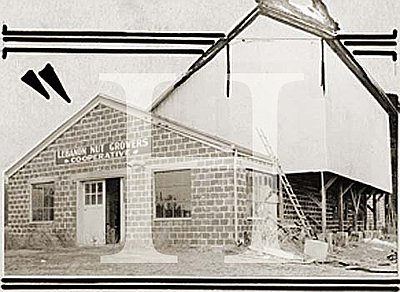 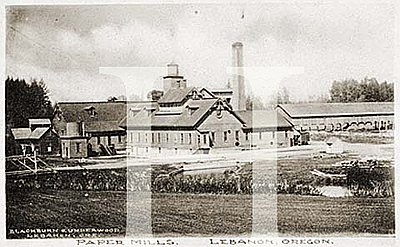 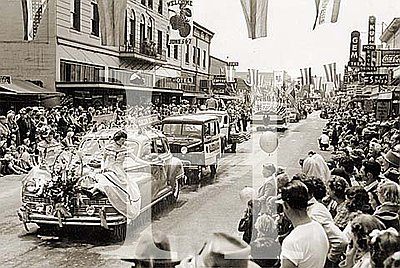 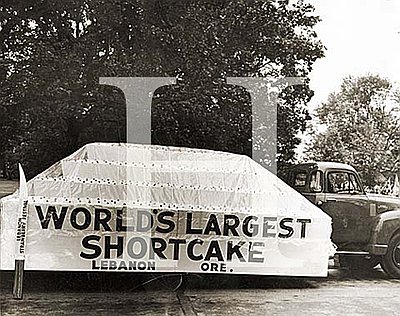 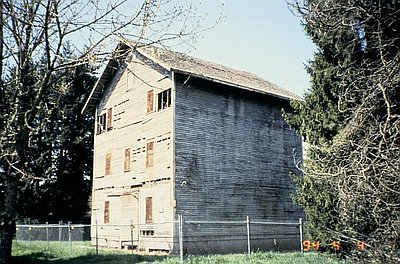 Evans Products Company was one of the most successful wood products corporations in the United States in the twentieth century. Their largest, most innovative, and most important west coast plant was located at Coos Bay (Coos County), Oregon, from 1928 to 1962.

The company founder, Edward Steptoe Evans, was a …

The Willamette Valley, with its temperate climate, wet winters, and arid summers, is an ideal place to grow grass seed. As a result, Oregon produces more cool-season forage and turf grass than anywhere else in the world. In 2010, grass seed was the sixth highest value commodity crop in the …

The Oregon and California Lands Act, heralded as a forward-looking conservation measure when it became law in 1937, has been mired in controversy for most of its existence. The origins of the O&C lands are rooted in the Pacific Railway Act of 1862 and its successors, measures that empowered Congress …

Santiam Pass, at an elevation of 4,817 feet, is a major highway crossing of the middle Cascade Range. Located on U.S. 20 at milepost 80.8, the pass crosses the Cascades Crest south of Mount Jefferson and north of the Three Sisters. Beginning in 1861, when the first Santiam Wagon Road …

The Santiam Wagon Road was a vital commercial link connecting the Willamette Valley with central Oregon. Built between 1861 and 1868, the road, which closely followed traditional Indian trails, was in use into the late 1930s and made possible the settlement of central Oregon.

On June 5, 1850, An Act Authorizing the Negotiation of Treaties with the Indian Tribes in the Territory of Oregon, for the Extinguishment of their Claims to Lands Lying West of the Cascade Mountains was passed into law. The act established a commission to negotiate treaties with western Oregon …