At its height in 2004, the video rental store chain Blockbuster had over nine thousand locations in the United States. By summer 2018, that number had dwindled to one—in Bend, Oregon.

Hit hard by the rise of video streaming services, DVR (digital video recorder) technology, and alternative DVD delivery models such as Netflix and Redbox, Blockbuster experienced a sharp and steady decline, culminating in bankruptcy proceedings in 2011. DISH Network, a satellite television company, purchased the failing company in April for $320 million, reportedly to "complement our existing video offerings while presenting cross-marketing and service-extension opportunities for Dish Network," according to a 2011 press release.

Whatever their goals, Dish Network was unable to revive the dying business. An attempt to implement a Netflix-style streaming service with Blockbuster content for Dish Network subscribers flopped. Two years later, the last Blockbuster stores owned by the company were closed down. Privately owned stores that licensed the Blockbuster brand lingered on, gradually shutting down until there were just three Blockbusters left in early 2018: two in Alaska, and one in Bend.

The store in Bend, owned by Ken Tisher, had licensed the Blockbuster name from the company in 2000. Tisher had opened his first video store, Pacific Video, in 1990 on Southeast Division Street in Portland and had turned it into a local chain, with several stores in central Oregon. All of those stores were converted to Blockbusters in 2000. But the central Oregon stores were subject to the same market forces that drove other Blockbusters out of business, and Tisher gradually closed all of his stores except the one on Northeast Revere Street in Bend. By August 2018, after two Blockbuster holdouts in Alaska closed, the Bend store was the last remaining Blockbuster in the country.

“We still have that core group of customers that knows we’re local, are very loyal and come in every week,” Sandi Harding, manager of the Bend Blockbuster, told the New York Times. “Everyone’s tired of sitting at home on their phones and their laptops and not having any personal interactions.” Harding purchases new movie titles each week from the local Walmart or Target to rent at the store, which she complements with candy purchased from Costco.

As national news reports surfaced about the last Blockbuster, the Bend video store suddenly found itself becoming a tourist site. By late summer of 2018, tourists were visiting the city specifically to take photographs of themselves outside the last remaining Blockbuster in the United States.

Jacobs, Julia. "Soon Only One Blockbuster Will Be Left in the United States." New York Times, July 14, 2018. https://www.nytimes.com/2018/07/14/business/last-blockbuster-video-oregon.html 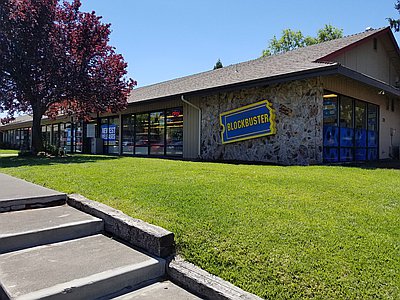