In 1909, lumberman E.D. Wetmore traveled through Oregon buying up vast tracts of timberland. He purchased about 50,000 acres in Oregon, Washington, and Arizona. The deeds were all classified as land grants and were signed by President Theodore Roosevelt.

Of all his timber holdings, Wetmore’s most prized were those in central Oregon's Wheeler County, which he named Kinzua, after a river in his home state of Pennsylvania. In 1928, he had his only mill built there, effectively making Kinzua the hub of his lumber business, the Kinzua Pine Mills Company. As the mill's productivity increased, so did the region's population, which led to a housing shortage for the mill's employees. To address the problem, management turned to the "company town" model.

In 1928, the company created a town that it named Kinzua. The town boasted 125 homes, a U.S. post office, a golf course, a lake full of trout, a library, grocery and department stores, a fully equipped and staffed first-aid station, a tavern, a restaurant, a barber shop, and a railroad line connecting the town to nearby Condon. Kinzua's facilities, along with its location in the pristine Oregon wilderness, made it a travel destination for hobbyists and travelers from around the world. At its peak (around 1950), the company town grew to a population of around 700 residents, making it the largest town in Wheeler County.

Although the town of Kinzua had its time in the limelight, it eventually became infeasible for the company to maintain the town. In 1978, operations at Eastern Oregon Logging Company, now under new ownership and a new name, came to an end. In 1982, 400,000 Ponderosa Pine were planted on the site, burying the former logging town beneath a forest, a rare occurrence indeed. 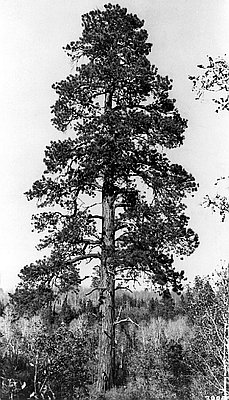