Hathaway Jones was proud to be Oregon's biggest liar. While others occasionally made the claim, no other Oregon storyteller captured the public imagination like Jones did. His tales have appeared in books, oral histories, Works Progress Administration (WPA) files, Web sites, and folk festivals—even though he rarely traveled beyond the Rogue River.

Born of Oregon Trail pioneers, Jones first heard European-style tall tales, called Münchausen, from his grandfather Ike Jones, who had arrived in Oregon from Ohio with a wagonful of lies about fish, skunks, snakes, and bears. He found work in the mines at Blossom Bar on the Rogue; but by 1898, he had a job with the newly expanded mail service hauling packages by mule from Dothan to Illahee—and stopping at almost every cabin for coffee and some lies.

Jones's long periods of isolation gave him a chance to practice his art, often adapting an outlander's tale to the Rogue setting. Observers noted that Jones had a cleft palate, partly covered by a huge moustache—a combination that gave his lies a distinct twang and nasality.

In 1937, after forty years of hauling mail, Jones died in a fall on the Rogue. In a heartfelt obituary in the Oregonian, the eulogist predicted that his memory and canon of stories would soon pass into obscurity. Three-quarters of a century later, however, his prowess has grown. In college classrooms, around campfires, and on barstools, people continue to tell Hathaway Jones stories, such as "The Year of the Big Snow," as repeated by Nancy Wilson Ross:

One winter snow started early on the Rogue and came down so fast that Hathaway, hunting in the hills, couldn't walk out to his cabin and had to sit down and slide from the hilltop to the river bank. On the way down he lost his watch, which was a real pity, as he had intended timing the slide. Next summer he was up hunting in the hills again and sat down under a tree to rest. He became aware of a ticking sound near him, which he finally located up the tree under which he was resting. He got up, climbed the tree, and there sure enough was his watch, still going. That was how he knew how deep the snow had been that winter. He had climbed sixty feet up that tree.

In Jones's tales, exaggeration is the key element. He always began with a convincing homespun anecdote about life on the river, often describing his own fishing or hunting experiences, but gradually inflated the details until the truth was stretched, as one friend said, "to an unbustable extent."

There are reasons for Jones's lasting reputation. In American Folklore: An Encyclopedia, Jan Harold Brunvand writes that surviving Hathaway Jones stories represent one of the largest collections of tale-telling from a single American source. One such repository is Oregon's WPA Collection at the Oregon State Library. Another is Stephen Dow Beckham's Tall Tales from Rogue River: The Yarns of Hathaway Jones. And researchers can find Hathaway chronicled in oral histories from the Randall V. Mills Folklore Archive at the University of Oregon. Hathaway tales have become popular additions to folklore classes, and they may provide the best American examples of the Münchausen tale. 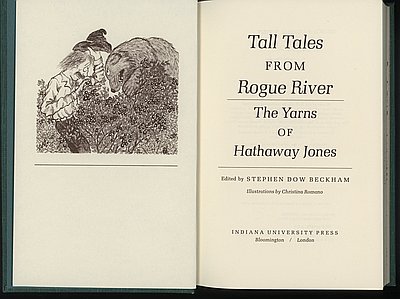