Tenor saxophonist Jim Pepper was an internationally recognized and influential jazz musician. He is best remembered for "Witchi-Tai-To," his elaboration of a Comanche peyote chant learned from his grandfather Ralph Pepper, a ceremonial leader of the Kaw Tribe in Oklahoma. "Witchi-Tai-To" may be the most recorded and performed Native American song of all time.

Born in Salem, Oregon, on June 18, 1941, Pepper was raised in the Parkrose District of Portland. He began moving between cultures as a dancer during his early teens. Encouraged by his parents, Gilbert and Floy Pepper, he alternated between tap and Indian dancing at school assemblies, powwows, and on Portland television with Grandfather Ralph. Beginning with the clarinet and then saxophones and flute, Jim Pepper's extraordinary ear and facility as an instrumentalist led to underage appearances at Portland jazz venues such as the Shadows and the Cotton Club.

Pepper's mercurial career is best characterized as a crossing of boundaries—musical, cultural, and social. The consequences were both magnificent and painful. "Jim got shiny eyes," wrote a fan in Europe, where Pepper had his greatest success. He was an explosion of contradictions, a loner who created community every time he sang.

There were a host of Jim Peppers. There was the person who related jubilantly to African Americans and American Indians—"the brothers and skins," in his words. There was the literate, articulate colleague of artists and intellectuals (American and European). There was the educator, ministering to young American Indians and aspiring musicians. There were also the substance abuser and the exalting outdoors man who celebrated the natural beauty of Oregon and Alaska, where he played his flute with a bird.

Pepper favored the large tone and muscular attack of the eastern, hard-edged jazz of the 1960s, and he developed an exceptionally distinctive sound. His was a music of extremes, blistering rapid runs over and around the chord changes at one pole, caressing balladry at the other. The success of "Witchi-Tai-To," a collaboration with guitarist Larry Coryell and bassist Chris Hills, led to a bifurcation of his career. He alternated mainstream and avant-garde jazz with performances of Creek, Lakota, Caddo, and other American Indian songs.

The Native American material made him a celebrity in Europe, where American Indians have had exalted standing since nineteenth-century tours by Buffalo Bill's Wild West show and the popular western novels of Karl May. The bulk of his recordings were produced in Germany, which accounts for the general inaccessibility of his music in the United States.

Pepper had a lifelong fascination with the interface between Native and African Americans and considered a State Department-sponsored tour of West Africa in 1980 to be a defining experience. For an urban, largely assimilated, half-blood Indian, village life in Africa (performances were in the bush, not concert halls) vivified a connection with the traditional life of his origins. The tour was organized by Don Cherry (Afro-American and Choctaw), an influential figure in jazz and world music. The collaboration between Pepper and Cherry conjoined two trickster traditions, Coyote and the Signifyin(g) Monkey.

Lymphoma ended Pepper's life in 1992 when, according to all accounts, he was on the cusp of international fame. Since then, scores of Pepper memorial concerts have been staged in the Unites States and Europe, including one arranged and conducted by conductor Gunther Schuller, a Pulitzer Prize-winning composer and jazz scholar. 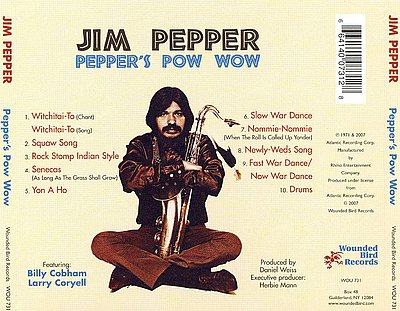