Dean Ing is a writer of technically astute, survivalist-oriented science fiction and high-tech thrillers. A professional writer since 1977, he has written twenty-one books, including The Rackham Files, Anasazi, and The Ransom of Black Stealth One, as well as many short stories and essays.

In Ing’s fiction, his characters are involved with scientific or engineering solutions and entrepreneurial innovation, elements drawn from his own experience. A lifelong tinkerer, designer, and builder, he was an Air Force crew chief and a senior engineer for United Technologies and Lockheed. His characters know how things work, and they use ingenuity and engineering to solve situational challenges. Ing's work reflects the Oregon traditions of self-reliant independence and suspicion of authority.

“Since I deplore the voracious appetite of the public for entertainment-for-entertainment’s sake,” he told an interviewer in 1982, “most of my work has a clear didactic element. . . . I believe that Jefferson’s ideal of the independent yeoman farmer should be familiar to every generation because I mistrust a technological society in which most members are thoroughly incompetent to maintain the hardware or the software.”

From his home in Ashland, Ing has kept in touch with former colleagues in the defense and intelligence communities and has maintained a southern Oregon “brain trust” of local people who have technical and espionage expertise, associations that have informed his writing.

Ing’s prophetic first novel, Soft Targets (1979), was an unsettling omen of the nation’s vulnerability epitomized by the terrorist attack on the World Trade Center on September 11, 2001. In an interview for the July 29, 1996, Medford Mail Tribune, Ing referred to the terrorist attack at the Atlanta Olympics. “I predict more of the same," he said, "because we haven’t learned anything and they have.”

In much of his work, Ing provides information on how to survive in the aftermath of nuclear war or accident, including how to be prepared, how to fabricate tools, how to evacuate cities, and how to develop alternative energy sources. His home library overflows with reference works, models, and drawings of prototype cars and planes; and his garage houses a futuristic-looking sports car, dubbed the Mayan Magnum, that he designed, built, and drove in the 1960s.

When Ing’s characters describe technical solutions, ranging from improvising snowshoes to invisible aircraft, it is likely that he has a prototype hanging in his garage where he tested the ideas. An unpatented inventor, Ing has given away many of his ideas to prevent corporations from ownership, as he believes people too often allow themselves to be marginalized by powerful corporate interests.

Ing believes that a person’s chances of survival are best in a small town like Ashland, where he has lived with his wife Geneva since 1980. In 2009, he was working on stories based on his boyhood experiences, which he characterized as his “homage to Tom Sawyer.” 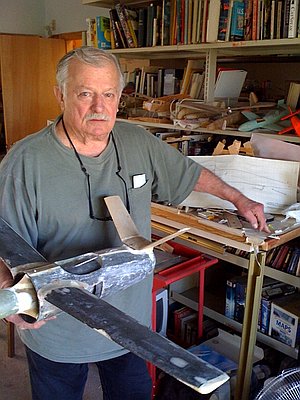