Gilchrist, in northern Klamath County, located along U.S. Highway 97 about fifty miles south of Bend, was the last industrial company town in Oregon owned entirely by a family. Located in the Deschutes National Forest, the town was built to accommodate the factory, workers’ housing, and commercial facilities for the Gilchrist Timber Company when the company moved its operations from Laurel, Mississippi, in 1937.

Not only did the town represent enlightened attitudes of social organization, but it also incorporated high design standards of buildings for a wide range of privately run businesses. Moreover, the company maintained the commercial buildings and residences on a regular schedule.

Gilchrist prospered from the time the mill opened in 1938 until it was sold in 1991, representing over a half century of progressive social accommodation and successful industrial production. The physical structure of the town, in large measure, has remained intact; but the closure of the mill and sale of buildings to individual owners brought an end to the coordinated maintenance of properties that gave the town its original character.

Albert Gilchrist began the family lumbering business in New Hampshire in 1850. As those forests were depleted, his son, Frank William Gilchrist, moved operations to the Midwest. In 1907, the company moved its operation to southern Mississippi. Albert’s grandson, Frank R. Gilchrist, anticipating the eventual reduction of usable timber in and around Mississippi, began investing in timberlands in California and Idaho, as well as some 100,000 acres in central Oregon. In 1937, company officials and Albert’s great-grandson Frank W. Gilchrist decided to relocate the entire lumbering operation to Oregon.

The new mill would be far removed from a town capable of supplying workers’ needs, so the company created a self-sustaining community, complete with homes, schools, and shops. Portland architect Hollis Johnston, who designed the town, placed the mill complex and log pond on the west side of Highway 97 and the residential area on the east side. Using a Scandinavian style for the public and commercial buildings, he employed stenciled patterns of bright colors with more minimal decorative details on the 128 initial residences.

The town is an extended grid of two parallel residential streets with a shopping complex at its center incorporating a restaurant, cocktail lounge, barbershop, beauty parlor, bowling alley, grocery store, meat market, post office, and library. A motion picture theater was built nearby. Behind the shopping cluster are the schools and an apartment building to house teachers. The school was built as a New Deal Public Works Administration project in 1939. Every five years, the company repainted the houses and shopping complex “Gilchrist Brown.” For decades, the town’s population remained at around 600 people.

The Gilchrist Company exercised a light hand, but its role as a benevolent parent ended at the end of the twentieth century. Mill operation diminished in the 1980s, and in 1991 the mill and timberlands were sold to Crown Pacific Partners, which laid off all the employees. In 1997-1998, the houses were sold to their occupants.

Though the mill was modified in 2000 to handle smaller dimension logs, production efficiency dropped and Crown Pacific declared bankruptcy in 2003. The company was taken over by its creditors in late 2004, and in 2006 was acquired by Interfor Pacific of Canada. Some of the houses were sold to people seeking vacation residences.

Where the Gilchrist Company had once employed up to 300 workers, the mill operated in 2010 with about 15 employees. A hoped-for destination resort in the former Gilchrist timberlands was halted due to the 2007-2010 recession, but it still remains one solution to the greatly diminished Gilchrist economy. 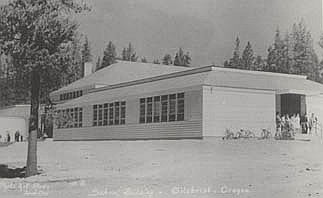