On November 9, 1970, a forty-five-foot, eight-ton sperm whale washed ashore near Florence on Oregon's south coast. In addition to the stench and the possibility that the body would burst, local officials were concerned that people curious about the carcass might climb on it and fall in. The agency responsible for Oregon beaches, the Oregon State Highway Division (now the Oregon Department of Transportation), was called in to remove the whale. After consulting with U.S. Navy and munitions experts, Assistant District Highway Engineer George Thornton decided to treat the carcass as a boulder and to use dynamite to dislodge it.

A crowd of spectators and local reporters gathered on the beach on November 12 about a quarter mile from the carcass. The engineers expected the whale to explode into small pieces, which seagulls and other scavengers would take care of. When Thornton gave the signal, State Highway Division workers set off a half-ton of dynamite.

“The beach erupted in a 100-foot-high column of sand and whale,” Larry Bacon reported in the Register-Guard. “Chunks of the animal flew in every direction, and spectators began to scream and run for cover when they glimpsed large pieces soaring directly overhead.” A sedan parked near the onlookers was crushed by a large chunk of blubber.

While no one was harmed by the explosion or the falling debris, chunks of the whale had to be collected and buried. KATU television news reporter Paul Linnman provided a memorable account that included this description: “the blast blasted blubber beyond all believable bounds.”

The story of the exploding whale was given new life on May 20, 1990, when humorist Dave Barry wrote “Moby Yuck” for his syndicated column. An abridged version of the piece was posted on an electronic bulletin board, and the story spread. Outraged readers who believed the event had just happened peppered Ed Shoaps, Oregon Department of Transportation public information officer, with phone calls. It was, Shoaps told National Public Radio in 2013, the “first story to go viral on the Internet.”

The tale of the exploding whale was a cautionary one. In 1979, when forty-one sperm whales beached themselves and died on a beach south of Florence, “the possibility of blasting the carcasses to bits with dynamite was quickly passed over.” Authorities, the Eugene Register-Guard reported, buried the carcasses instead. Oregon’s current policy is to bury dead beached whales in the sand.

Watch the KATU coverage of the exploding whale here. 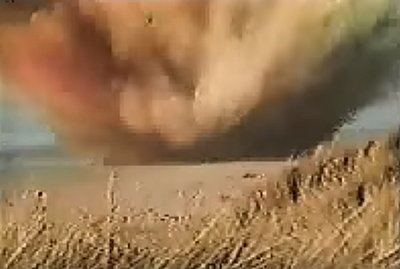 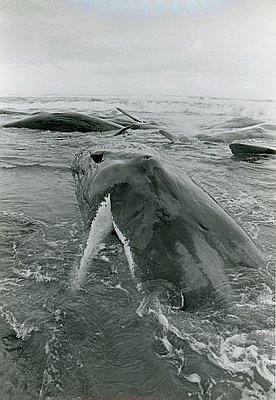 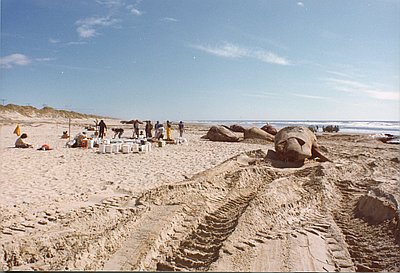 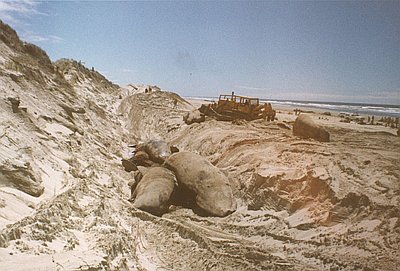 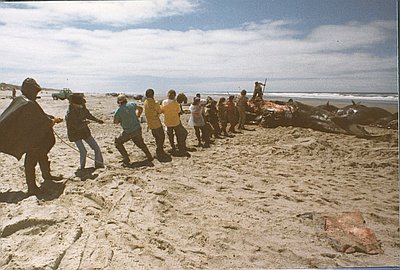 Bacon, Larry. “When They Blow up a Whale, They Really Blow it up!” Eugene Register-Guard, November 1, 1970.