Irvin “Irv” Henry Fletcher was president of the Oregon AFL-CIO during the 1980s and 1990s, a period of significant change in the state’s economy. During his tenure, the state’s labor movement morphed from one dominated by wood products unions, which had their start during the Great Depression, to one led by public employee unions. Fletcher helped to negotiate this shift in power in key ways. He welcomed and sometimes cajoled the new public employee unions to affiliate with the AFL-CIO, while making sure he did not lose sight of the needs of the more established labor movement represented by wood products and building trades unions.

Fletcher was born in Milo, Maine, on August 30, 1932. The son of a union railroad worker and a teacher, he grew up in a small community where railroading was the talk at the Sunday dinner table. After graduating from high school in 1949, he served in the U.S. Navy, working as a machinist in ship engine rooms during the Korean War. He then attended the University of Maine, where he earned bachelor’s and master’s degrees in education.

Fletcher moved to Noland, California, in the early 1950s to accept a teaching position. A year later, he moved to Klamath Falls, Oregon, where he worked for twelve years as a junior high school teacher and helped found Local 1664 of the American Federation of Teachers. He was schooled in the politics of Oregon’s labor movement in southern Oregon, where he participated in a wide range of activities, including support of the United Farmworkers.

Fletcher married Ann Shabot, a former nun, and converted to Catholicism. The progressive labor teachings of the church would be a touchstone for his work throughout the years. The couple had four children and in 1970 moved to Eugene, where Fletcher received a master’s degree in industrial relations at the University of Oregon. He and Shabot would later divorce.

In addition to working part time as a teacher in the state penitentiary, Fletcher was director of the state’s Apprenticeship Information Center and secretary of the Lane County Labor Council, which he helped build into a formidable political voice for labor in the upper Willamette Valley. He also was instrumental in developing a coalition of educators and politicians who created the Labor Education and Research Center, which the legislature established at the University of Oregon in 1977.

In 1981, Fletcher defeated two-term incumbent and Machinist union member Bob Kennedy to become president of the Oregon AFL-CIO. In that position, he sought to give labor visibility in the state, to lobby for labor-friendly legislation, and to affiliate the tens of thousands of union members who were not members of local or state AFL-CIO bodies. Known for his attention to small affiliated unions and central labor councils, Fletcher traveled throughout the state to talk with local members.

Unemployment in Oregon rose to 11.5 percent during the recession in the early 1980s, and a third of the Federation’s membership was lost to layoffs in the wood products industry. That decade also saw the most concerted attack on private-sector unions since the Labor Management Relations Act (the Taft-Hartley Act) was passed in 1947, as the labor relations environment fostered by President Ronald Reagan’s firing of air traffic controllers played out in Oregon in a series of broken strikes in the wood products industry.

Fletcher was particularly active as a lobbyist at the legislature, working to improve Oregon’s unemployment insurance and raise the minimum wage. When he retired in 1999, the state's minimum wage was the highest in the country, and the labor movement had fought off attempts to create a two-tier tip credit system, which would have allowed a lower minimum wage for workers in the hospitality industry.

Perhaps the most contentious issue during Fletcher’s tenure as president was the reform of the workers’ compensation system, negotiated in a series of tripartite meetings referred to as the Mahonia Hall Agreement, in the spring of 1990. In an attempt to reduce some of the nation’s highest workers’ compensation rates, Governor Neil Goldschmidt convened a labor-management committee, chaired by Insurance Commissioner Ted Kulongoski. The committee recommended changes in the formula for employers’ payment of workers’ compensation fees. The final bill, SB 1187, changed the definition of a "compensable injury," making it easier for the agency to deny certain worker claims. As an incentive for labor support, the bill also mandated workplace safety for many businesses and increased the amount of money spent on preventing occupational safety and health hazards by supplementing Oregon OSHA’s budget.

The Mahonia Hall proposal bitterly divided Oregon's labor movement. Some public employee unions and the Oregon Industrial Union Council believed that the bill was too employer friendly. Realizing they needed labor's support to pass the legislation, Goldschmidt and Kulongoski lobbied the Oregon AFL-CIO's Executive Board for their endorsement, which it gave by the narrowest of margins. The reform bill passed on May 7, 1990.

At the state AFL-CIO's annual convention the next year, some delegates charged that the governor and the head of the Workers Compensation Agency (SAIF) had gained a financial windfall due to inaccurate statements on the financial liquidity of the workers’ compensation system. Fletcher found himself in the midst of this controversy, having supported reform while trying to hold together the disparate factions of the Oregon labor movement. He said later that he regretted that the bill did not include more features that would share savings in the system with injured workers.

During the 1980s and 1990s, Oregon’s larger public sector unions gained more political power, as they did throughout the country. Fletcher’s tenure as president saw the affiliation of the Oregon Public Employees Union (SEIU 503); and by the time he retired from the presidency in 1999, 40 percent of the Federation’s members were public employees. Some of this increase was due to the shift in the state’s economy from manufacturing to service industries, but some was also due to Fletcher's consistent courting of new affiliates and his efforts to strike a balance between the sometimes competing interests of the manufacturing unions and the public employees unions.

Fletcher ran unsuccessfully for the legislature in 2000 and served as an advisor to his fellow AFL-CIO officer Brad Witt, a member of the Oregon House of Representatives. He lives in Woodburn. 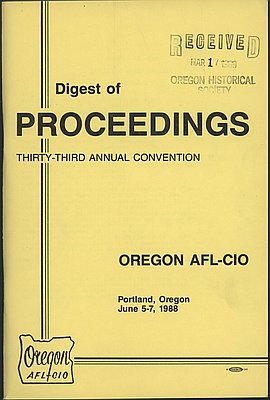 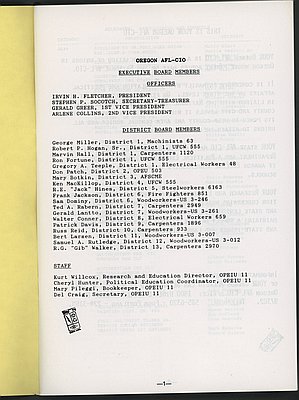 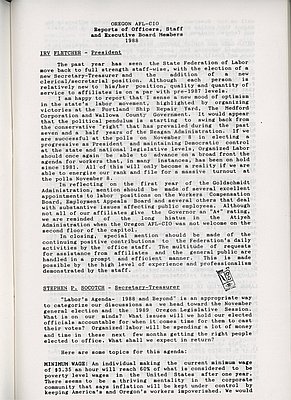 The Columbia River Fishermen's Beneficial Aid Society was organized on August 16, 1875; it was incorporated on March 3, 1876. The Society’s main purposes were to establish rules regarding the drifting grounds and boundaries for Columbia River gillnet fishermen and to establish insurance so that the widows of fishermen who …