The Evergreen Aviation & Space Museum and Captain Michael King Smith Educational Institute, near Highway 18 in McMinnville, opened as the Evergreen Aviation Museum on June 6, 2001, with exhibits on military, passenger, and cargo planes from all eras of aviation. The IMAX theater opened in 2007, the Space Museum opened the following year, and an aviation-themed water park opened in 2011.

The museum on aviation and the history of flight was the brainchild of Captain Michael King Smith, who flew F-15 fighter jets for the U.S. Air Force and the Oregon Air National Guard. He and his father, Delford Smith (1930-2014), had begun collecting airplanes in the 1990s for a museum they called the Evergreen Museum (later, the Evergreen AirVenture Museum), when Captain Smith was killed in an automobile accident in 1995. The museum continued to operate in his honor and was subsequently named after him.

Delford Smith is the founder of Evergreen International Aviation, Inc., and its affiliated companies in McMinnville. The museum’s holdings include the first helicopters owned by Smith’s company Evergreen Helicopters, founded in the 1960s.

One important airplane in the museum is the HK-1 Flying Boat, known as the Spruce Goose. Brought to McMinnville in 1993, the Goose was built by Howard Hughes in 1947, and its one flight in the Long Beach Harbor lasted a mere seventy seconds. Originally built to take troops and cargo trans-Atlantic during World War II, it was judged to be unsafe for travel and was decommissioned. The museum acquired the famous plane when its previous owners in Long Beach, California, lost funding for its maintenance and display.

Other airplanes in the museum include the North American P-51D Mustang, the Supermarine Spitfire Mk. XVI, and the Boeing B-17G Flying Fortress. Passenger and commercial planes include the Douglas DC-3A and the Ford 5-AT-B Tri-Motor Tin Goose. There is also a replica of the Wright Brothers 1903 Flyer and stunt planes that were popular during the 1930s. Each year, the museum selects Oregonians who have been important in aviation history for inclusion in the Oregon Aviation Hall of Honor.

The museum has an archive and library, and donations of items from service members and aviation enthusiasts are protected and displayed. The airplanes are kept as close as possible to their original specifications, and some are still capable of flying. A restoration and preservation crew works to match the previous conditions of old and damaged planes.

The museum focuses on education, and hands-on flight and engine simulators allow visitors to better understand the science of flying. The museum also has on-site classes for local high school students interested in aviation. 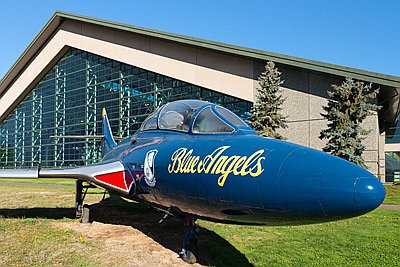 Oregon Museum of Science and Industry

The Schneider Museum of Art at Southern Oregon University in Ashland opened its doors to the public in the fall of 1986. The establishment of a museum was a community and university effort made possible by a gift from Ashland residents Bill and Florence Schneider. The museum is named in …