Erickson’s Saloon, sometimes called the Working Man’s Club or The Erickson Saloon, was a Portland establishment whose grandeur and notable size—epitomized by the 684-foot self-proclaimed “longest bar in the world” on its central drinking floor—ensured a national reputation that gave its glory years during the late nineteenth and early twentieth centuries an almost mythological reputation. The saloon’s lasting fame is largely attributable to writer Stewart Holbrook, whose 1954 Esquire article, “Elbow Bending for Giants,” remains the primary source for most writing on the subject. Stories about the saloon have become part of Portland lore and attest to the significance of Erickson’s among the laboring class.

August Erickson immigrated from Finland in the early 1880s. Within a decade, he had established himself as a charitable publican, admired among loggers and laborers and known in those early years for his honesty in business and his commitment to hospitality. Erickson built the first of several eponymous saloons on the block of Second Street and West Burnside in the part of Portland known as the North End.

The 1894 flood was a defining event in establishing the reputation of Erickson’s Saloon. Erickson stocked a barge with liquor and “dancers” outside his submerged bar, and the story is that patrons floated in on everything from a sloop to a log, with some staying until their money ran out.

The saloon Erickson rebuilt after the flood was the setting for the so-called legendary years immortalized by Holbrook, a period roughly dating from the flood of 1894 to a 1913 fire. The structure, rebuilt on a block-sized piece of land, had three stories of excess. The cavernous main hall on the first floor was home to the “longest bar” and, according to writer Wayne Curtis, featured a “$5,000 pipe organ,” a free museum, a music stage, and imported oil paintings. The second floor catered to the wealthy elite and featured private card parlors, sedate bars, and a sumptuous Gentlemen’s Grill with tuxedo-clad waiters. The third floor was given over to roofless cubicles known as “cribs” that hosted sex workers and mistresses.

The main hall echoed with the music of a band, the stomping of dancers, and the laughter of the clientele, providing what was for some an irresistible draw. One patron, writing anonymously in 1925 for the Loyal Legion of Loggers and Lumbermen’s Four L Bulletin in a memoir titled “Erickson’s: A Logger’s Reverie,” recalled how “loggers and ranchers, railroad men and miners, fisherman and sailors, prospectors, cowboys, stakey men and stiffs; high and low, adventurers all, they came from everywhere” to revel in the “boisterous and hearty, but often rude spontaneity of rough men [who] had free rein.”

Erickson’s was an economic engine. The saloon employed at least thirty bartenders at the long bar alone, with additional bartenders at the other bars and a number of bouncers, bootblacks, sex workers, fruit sellers, waiters, dancers, musicians, card dealers, and chefs. The bartenders were notable for their meticulous mustaches and hair, as well as their wit, conversational skills, and general good nature. The bouncers were large and ferocious when confronted with those who insisted on breaking the saloon’s few iron-clad rules, among them a prohibition against begging and discussing politics or religion. Sex trafficking was a major part of the business. “At best,” Erickson’s 1925 obituary in the Oregonian noted, “the place August Erickson kept was a brothel, and at its worst it was an inspiration to rage and crime.”

The main clientele at Erickson’s was local, supplemented by tourists who brought in what former bouncer Spider Johnson estimated to be “50 to 500” customers at a time. It was also a center for itinerant laborers and a repository for messages delivered with the assumption that the recipient would eventually end up there. The writer in the Four L Bulletin remembered that the “songs of a dozen tongues” competed with one another in the main hall. The saloon was known as the House of All Nations for its willingness to serve foreigners, Blacks, and other minorities.

Erickson, an alcoholic, became the subject of frequent legal charges and arrests for offenses, including dispute over ownership of the saloon and illegal gambling. By 1906, he had sold a portion of his ownership to Fred Fritz Jr., who owned Fritz’s Saloon and Theater across the street, and J. J. Russell, who ran the Cabaret Grill next door, but he continued to work at the saloon as a manager and mascot, while also opening the Clackamas Tavern on Clackamas Road. After a 1913 fire damaged the saloon, he sold the remainder of his ownership to Fritz and Russell. He spent the rest of his life in penury and died in 1925.

The rebuilding of Erickson’s Saloon coincided with the advent of Oregon’s Prohibition laws in 1915. The bar sold soft drinks and “near beer” and charged for its once-free Dainty Lunch. By the time Prohibition was repealed, the saloon was a shadow of itself. The Fritz family owned the property until the 1960s, and the bar changed ownership multiple times over the years. An establishment with the name of “Erickson’s” operated on Second and Burnside before finally closing as Erickson’s Tavern in 1981.

Innovative Housing redeveloped the site as low-income apartments in the 2000s, using elements of the building’s history that included sections of the bar, a urinal trough, and a line of blue paint marking the height of the 1894 flood. A sign on the building identifies it as “Erickson’s Saloon 1895.” 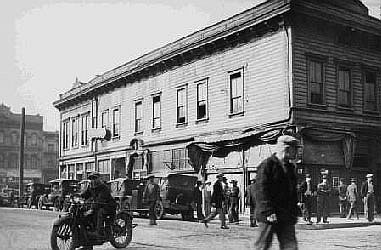 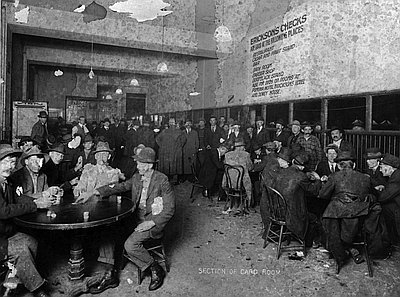 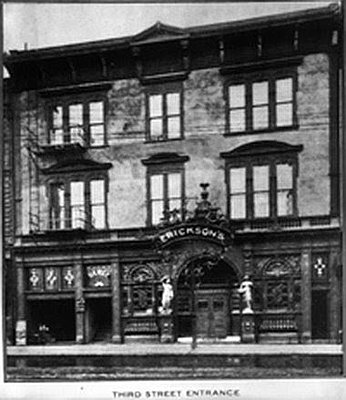 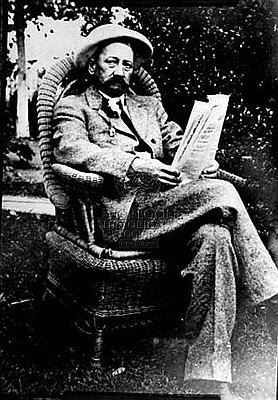 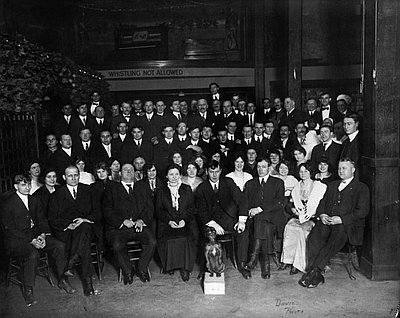 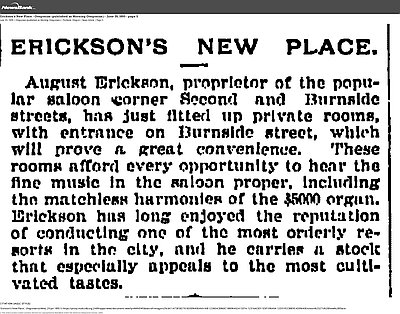 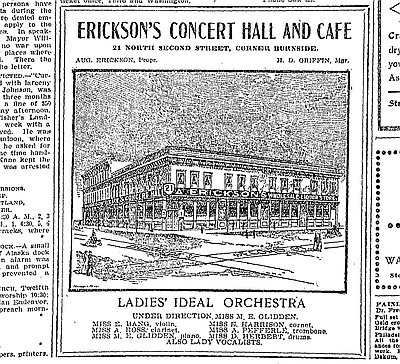 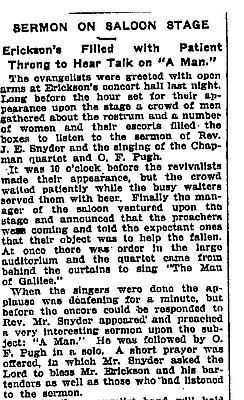 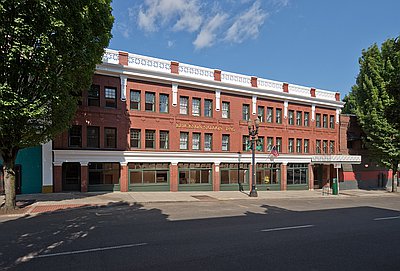