In a journey that spanned three years, Benjamin Louis Eulalie de Bonneville and his company of men blazed some of what became the Oregon Trail. Bonneville explored and surveyed territory that would become the Pacific Northwest states, interacted amicably with Indian tribes, and drew one of the first published maps of the interior West.

Bonneville was born in Paris in 1796 to French political radicals Nicolas and Margaret Bonneville, who were friends of political activist Thomas Paine. In 1803, Bonneville left for the United States to live with his mother and two brothers on Paine’s farm in New York. Paine left the farm to the Bonneville family when he died in 1809. When he was seventeen, Bonneville entered West Point Military Academy, graduating after two years as a brevet second lieutenant. Between his graduation in 1815 and 1820, Bonneville spent much of his time on the trans-Mississippi frontier, as well as in France with the Marquis de Lafayette. Prior to what would be his most important expedition, Bonneville focused primarily on Indian affairs in the territory of Arkansas, where he surveyed much of the land in the hopes of finding a suitable area to relocate Indian tribes.

In 1832, the U.S. Army granted Bonneville a yearlong leave of absence to study Native culture and trade with Pacific Northwest tribes. With the financial support of Alfred Seton, one of the members of the Astor Expedition, Bonneville's charge was to explore the topography of the West and find the best means of making western land available to American citizens. On May 1, 1832, Bonneville left Fort Osage, Missouri, with 110 men, including Lt. Michael Silvestre Cerré and Lt. Joseph Reddeford Walker, who had previously spent time in the Pacific Northwest.

On South Pass in present-day Wyoming, discovered first by Astor explorer Robert Stuart, Bonneville's expedition was one of the first to successfully traverse the pass with wagons. His description of that crossing was featured in his published trail journals and confirmed the possibility of wagon travel west over the divide.

Throughout the journey, Bonneville and his party had trouble establishing trading relationships with Native groups in the Columbia Basin. The Hudson’s Bay Company (HBC) controlled trade with Native people in much of the Pacific Northwest, making it difficult for Bonneville and his men, who were independent traders, to connect with tribes along the Columbia River, even though Bonneville and his men had created strong relationships with Nez Percé and Flatheads during the first parts of their journey. Having failed to obtain and trade furs, Bonneville was without money or provisions, and morale among the men was low.Overstaying his military leave by two years, Bonneville returned to Missouri with no success at trading, but with an understanding of Oregon topography, plants, animals, and Native people.

In 1836, Bonneville failed in an attempt to publish his travel journals, so he sold the manuscript to American author Washington Irving. Irving’s edited version of Bonneville’s stories of adventure, along with his maps, became The Adventures of Benjamin Bonneville, published in 1837. Although Irving praised Bonneville in the book, many explorers and historians of the nineteenth century thought Bonneville, though a well-respected officer, was an incompetent explorer who often took credit for the successes of Cerré and Walker.

After his foray into the American West, Bonneville returned to the U.S. Army, retaining his rank of major. He participated in both the Mexican-American War in 1845 and the Civil War as a commanding officer, and eventually gained promotion to brigadier colonel, a reward for his many faithful years in the service. In 1871, Bonneville married twenty-two-year-old Susan Neis, having lost his first wife and child almost ten years prior. Bonneville died on June 12, 1878, in the farmhouse he built near Fort Smith, Arkansas. At the time of his death, he was the U.S. Army’s oldest retired officer. 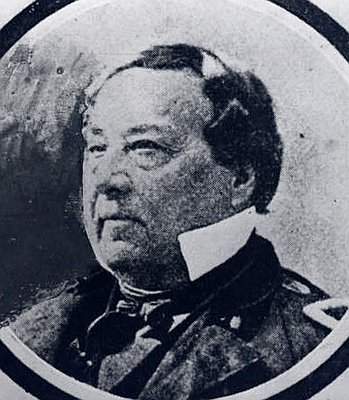 Irving, Washington. Adventures of Captain Bonneville; or, Scenes beyond the Rocky Mountains of the Far West. Portland: Binfords and Mort, 1954. (reprint)