Mel Blanc, who acted the voice of Bugs Bunny and over four hundred other characters, appeared in three thousand cartoons and animated film shorts. From Yosemite Sam and Daffy Duck to Mister Magoo and George Jetson, he made an enduring contribution to the art of voice animation. Blanc grew up in Portland, Oregon, where early in his career he was an entertainer and writer for KGW’s Hoot Owls radio program. During his years in Hollywood, he had hit recordings on Capitol Records, performed on radio and television network programs, and had his own radio show.

Melvin Jerome Blank was born to Frederick Harvey and Eva H. Katz Blank on May 30, 1908, in the Mission District of San Francisco. When he was six years old, the family moved to southwest Portland, where he attended Shattuck and Commerce grammar schools and Lincoln High School. In June 1923, at the age of fifteen, he got his first job as a radio performer, singing on KGW’s Stories by Aunt Nell, a weekday program for children. When he was sixteen, he changed the spelling of his last name to Blanc when a high school teacher told him he would amount to nothing—a blank, like his name.

In 1927, KGW hired Blanc for its popular Hoot Owls program, where he wrote and performed on the late-night variety show. With an occasional musical romp on a horn, ukulele, or violin, he delivered humorous yarns, sometimes using dialects. He soon moved to San Francisco, where he worked for his older brother Henry Blank, the program director for KFWI Radio. When the station closed as a casualty of the stock market crash in the fall of 1929, Blanc returned to KGW and the Hoot Owls.

On March 26, 1931, Blanc was named musical director of the RKO Orpheum Theater on Southwest Broadway in Portland, which featured movies and vaudeville acts. He led an eleven-piece band that performed on stage and doubled as the Hoot Owls Orchestra. "Mel Blanc & The RKO Westerners,” wrote Oregonian drama editor John Truebridge on April 10, 1931, “present a vaudeville act that is worthy of any circuit.”

Blanc, who was becoming known in Portland and on the West Coast as a multi-talented performer, caught the attention of NBC-owned KGO San Francisco. In May 1931, NBC announced that it had hired him as master of ceremonies for The Road Show, but the program was soon canceled and Blanc once again returned to Portland and the Hoot Owls. In March 1932, Blanc left for Los Angeles. He became a regular on the Don Lee Network program Merrymakers, heard over KOIN, but work was scarce and he made little money. On May 14, 1933, Blanc married Estelle Zelda Rosenbaum. Returning to Portland, he began Cobwebs and Nuts, an innovative late-night program that he wrote for KEX.

Cobwebs and Nuts ended in June 1935, and the Blancs moved back to Los Angeles. By August 1936, he was appearing on KNX's Hollywood Barn Dance and NBC Blue Networks’ The Jell-O Program Starring Jack Benny and was doing impressions of barnyard animals. While working for KFWB, he tried to get a voice audition with Warner Bros. Pictures but was repeatedly rejected. When the manager died in 1936, however, his replacement gave Blanc an audition and hired him. Porky's Road Race, his first Looney Tunes animated film short, was released on February 7, 1937.

By October, Blanc was working on a dozen network shows. He was the unhappy Mr. Postman on the Burns & Allen Show, Botsford Twink on the Abbott & Costello Show, Private Sad Sack on the Bob Hope Show, and a parrot and police inspector on the Lucky Strike Program Starring Jack Benny. In the first months of 1945, he introduced the voices of Pepe le Pew, Sylvester the Cat, and Yosemite Sam.

On June 9, 1949, Blanc made his motion picture debut playing the character Pancho in the M-G-M Technicolor musical Neptune's Daughter, which debuted in Portland on June 14, 1949 at J.J. Parkers United Artists Theatre. In 1953, he began showing up on network television, where he was a regular on the Flintstones, the Jack Benny Program, the Bugs Bunny Show, and Mister Magoo during the 1950s and 1960s.

Mel Blanc died in Los Angeles on July 10, 1989. His last movie, Jetsons: The Movie, was released in 1990. His work in voice animation is unprecedented in the history of the art form. 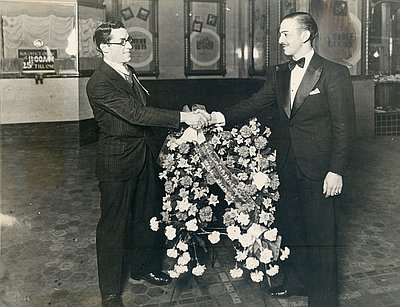 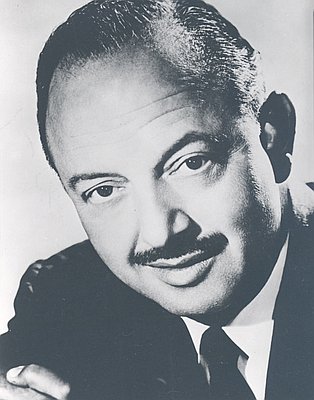 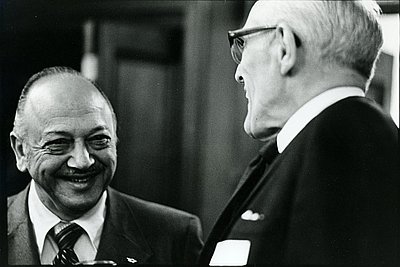