Bates was an unincorporated Oregon Lumber Company mill town in Grant County, one mile north of Austin Junction on U.S. Highway 26. In 1906, the company established a small lumber mill in Austin at the new terminus of the Sumpter Valley Railway. The company closed the mill in 1917 and opened a larger mill a mile west of the junction at what would become Bates.

David Christian Eccles, the president of the Oregon Lumber Company, was the eldest son of Utah Mormon entrepreneur David Eccles. One of his partners, Portland businessman Paul Chapman Bates, arranged the purchase of large tracts of timberland for the company, including property in the drainage of the Middle Fork of the John Day River. The new company town on the Middle Fork, at the intersection of State Highway 7 and Country Road 20, was named Batesville in his honor. The name was shortened to Bates in 1921.

The Bates mill operated from 1917 to 1975. During its high production years in the 1960s and 1970s, the mill could cut up to 180,000 board feet of lumber a day, producing an estimated two billion board feet during its lifetime.

Lumber from the Bates mill was shipped on the Sumpter Valley Railway to Baker, where the Oregon Lumber Company had its largest mill. The railway transported some passengers and freight, but its main purpose was to haul lumber from the drainages of the North Fork of the Burnt River and the Middle Fork of the John Day River. In 1947, when the Sumpter Valley Railway ceased operation, lumber transportation was handled by truck.

The Bates post office was established on March 24, 1919, to serve a population of approximately four hundred people who lived in dozens of company houses. The town also included a hotel, a powerhouse, an office, a dry kiln, a truck shop, a store, a grade school, a community hall, and a church.

On December 30, 1960, the Oregon Lumber Company sold the Bates mill and townsite to the Edward Hines Lumber Company, which operated the mill until 1975, when it was closed and dismantled. The post office closed on January 2, 1976.

The company houses were sold to their occupants for one dollar. Some owners disassembled their houses for materials, while others moved them to surrounding towns. The townsite was then cleared and sold to Henry Ricco, who owned the ranch that was adjacent to the property. Upon Ricco’s death, the Austin ranch, including the Bates townsite, passed to his niece, Joanne Ricco Vidondo and, when she died, to Fermin Echeverria. Echeverria sold the Bates parcel to a nonprofit subsidiary of Grant County.

On April 30, 2008, the Oregon Parks and Recreation Department purchased the remaining 131 acres of the Bates site from Grant County and established Bates State Park. 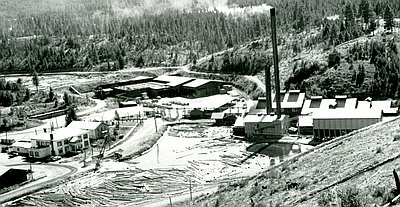 Bates State Park, located in Grant County, one mile north of Austin Junction on U.S. Highway 26, is on the site of the former Oregon Lumber Company mill and company town of Bates.

Bates was named for Paul Chapman Bates, a Portland businessman who assembled large tracts of timberland …