Writing under the pen name Ruth Rover, Margaret Jewett Smith Bailey wrote one of the earliest works in Oregon, The Grains, or, Passages in the Life of Ruth Rover, with Occasional Pictures of Oregon, Natural and Moral, published in 1854 by Carter & Austin in Portland. The book appeared in two parts, in August and September of 1854, and was made available in a reconstructed, single volume in 1986.

Unique and difficult to classify under a single genre, The Grains is one of the first examples of a book by a Pacific Northwest woman seeking to empower herself through a personal narrative. As historian Edwin Bingham observed in his foreword to the 1986 edition, The Grains is unusual because it is "part autobiography, part religious testimonial, part history and travelogue" and might even be called "a novel, the first novel written and published on the Pacific Coast."

When The Grains was published, the author was already known to some Oregon readers. As early as 1838, she had published letters in church papers, and her poetry, signed MJB, appeared in the Oregon Spectator beginning in 1846. Immediately following her 1854 divorce and prior to publication of The Grains, she edited six columns of the "Ladies Department" for the Oregon Spectator and indicated a desire to edit a paper of her own for women. But as a divorced woman of questionable reputation, her hope was not realized, and her writing career ended with publication of The Grains.

Margaret Bailey's clouded association with the Methodist Willamette Mission and rumors about her recent divorce compelled her to write this thinly disguised autobiography. In the persona of Ruth Rover, she confessed in Chapter One of The Grains: "I am avoided and shunned, and slighted, and regarded with suspicions in every place till my life is more burdensome than death would be. I have, therefore, … been impelled by a sense of justice due to myself and a wish that my future life should not be overshadowed by the gloom of the present.”

The Grains and its author were met with harsh criticism. The anonymous Squills of the Oregonian noted this was not the biography of a Napoleon or a Byron, but the story of a mere woman: "[W]ho the dickens cares, about the existence of a fly, or in whose pan of molasses the insect disappeared" (Oregonian, August 5, 1854). Squills added: "The immorality, not to say indecency of the work, is far too much in advance even for the fast ideas and morals of young Oregon" (Oregonian, September 9, 1854). Criticisms of "immorality" and "indecency," whether aimed at her writing or her character, continued to follow Bailey throughout her life.

Margaret Jewett Smith was born in about 1812, in Saugus, Massachusetts. Against the desires of her family, she attended Wesleyan Academy at Wilbraham and secured an appointment to go to Oregon Country as a mission teacher in the company of the Reverend David Leslie, his family, and H.K.W. Perkins. After sailing from Boston in January 1837, they traveled via the Sandwich (Hawaiian) Islands to become part of the Oregon Mission, established in 1834 by the Reverend Jason Lee and the Missionary Society of the Methodist Episcopal Church.

As the only unattached white woman at the mission, Smith was pressed by mission authorities to marry. Her outspokenness, quarrels with Reverend Leslie, and refusal to marry her mission suitor, William H. Willson, led to serious problems. To force a marriage, Willson falsely stated that he and Smith had been intimate. Smith, hoping to avoid expulsion from the mission, confessed to "the crime of fornication." When her confession was made public, her opportunities as a mission teacher were ended.

In March 1839, Smith married Dr. William J. Bailey, who was from outside the mission, and the couple settled near French Prairie. She soon discovered that her husband had a violent temper, particularly after drinking. His abuse led to divorce on April 12, 1854, the same year The Grains was published.

Margaret Bailey's second marriage was to Francis Waddle, in Polk County, in 1855; they were divorced three years later. She then moved to Washington Territory and married a Mr. Crane. She died in poverty in Seattle on May 17, 1882. 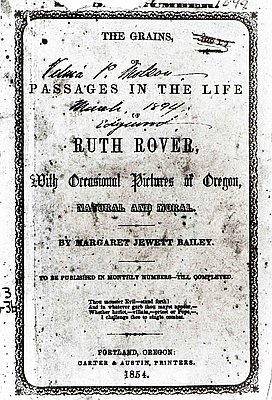 The first literature of Oregon followed patterns typical of most other regions of the United States. From the earliest Indian stories to the romantic novels and narratives at the end of the nineteenth century, Oregon writers mimicked the literary output of earlier American subregions. Much of this literature spoke of coming …