Alsea is an unincorporated community of about two hundred residents in the Coast Range near the juncture of the North and South Forks of the Alsea River. The town is approximately twenty-six miles west of Corvallis on Oregon Highway 34 and forty miles from the coastal community of Waldport.

The name Alsea is derived from an Indian band (Alsi, Alseya) that lived near the estuary on the lower river. Evidence of Native trails through the upper Alsea Valley indicate that people traversed the mountains to and from the Willamette Valley and to several villages on the lower river. Villagers also made seasonal gathering treks to the upper valley. A reference to the "Alseya Settlement" first appeared on a General Land Office survey map in the mid-1850s, indicating that a few white farmers had taken out Donation Land claims in the area.

Although a post office was established at Alsea in 1871, the small farm and ranch community was isolated, distant from main routes of travel and without a railroad. Improved highways and the use of trucks for hauling logs and lumber eventually opened upper-valley forested hillsides to timber harvests. With the boom in lumber production following World War II, several small sawmills operated in the valley. With a consolidation in production, virtually all of the mills had closed by the early 1970s.

Nevertheless, the town prospered through the 1980s, with heavy harvests in the Siuslaw National Forest, but environmental restrictions, related to the northern spotted owl and other threatened species, dramatically curbed federal timber sales during the 1990s. When the Siuslaw Ranger Station closed in 1996, more than a hundred workers were transferred to other Forest Service offices. A small health clinic and a branch of the Benton County Library serve Alsea residents, many of whom commute to the Willamette Valley for employment. 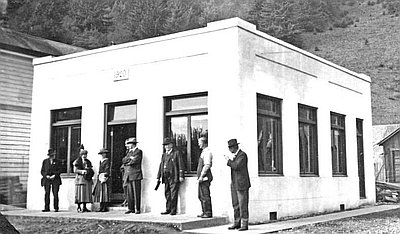 The Alsea River originates in creeks flowing from the west side of Mary's Peak, the highest mountain in the Coast Range (elev. 4101 ft.), and in several streams in northwestern Lane County. The river flows west-northwesterly in a winding course on its way to the Pacific Ocean at Waldport on …