Sebastian C. Adams provides an example of how the Christian missionary zeal of many early Oregon settlers was accompanied by exceptional entreprenurial talents.

Adams was born into a Presbyterian family near Sandusky, Ohio, in 1825, and moved with his family to Galesburg, Illinois, when he was twelve. He briefly attended Knox College but left to begin a career as a teacher. Recognized as a gifted instructor, his services were in great demand. In early 1850, he undertook the arduous trek overland on the Oregon Trail headed to California. During the journey, Adams lost all his possessions and arrived at an unknown Oregon destination, unconscious and near death from starvation. In September, he had recuperated enough to join his elder brother William Lysander Adams in Yamhill County, Oregon. He took up a Donation Land Grant, married Martha McBride, and sent for his Illinois family.

Adams taught school for four years in a shanty on his land then moved to McMinnville where he worked as a surveyor. He founded a college sponsored by the Disciples of Christ, but after two years the enterprise failed from lack of funding. The property was given to the local Bethel College.

Adams served both as County Clerk and as State Senator while living in Yamhill County, but by 1869 had settled in Salem with his family. While serving as a local preacher at First Christian Church Adams continued as an educator, particularly exploring new methods to improve the teaching of history. He also published many articles dealing with the origins of religion.

In 1871, his Chronological Chart of Ancient, Modern and Biblical History was published by Strobridge & Company of Cincinnati, Ohio, the premier publisher of American commercial art. The technique of chromolithography offered the emerging middle class affordable color reproductions and, in this case, made lessons of history colorful and dramatic. Adams spent the next six years traveling, successfully selling the publication at a low cost. Modestly, Adams only claimed to have "synchronized" this historical chart. Now, over a hundred and thirty years later, it is a valuable addition to American museums and library collections as an early representative of commercial illustration.

After the death of his first wife, Adams married twice more. His personal philosophy and studies led him to the Unitarian faith. Although little about him is remembered today, Sebastian Adams was one of Salem’s most honored citizens, recognized as an inspiring minister and teacher, as well as being a successful businessman. He maintained an office downtown and lived in a nearby socially prominent neighborhood, as did his daughter—wife of the former mayor, George Williams. In 1896, Adams was listed in the City Directory as a "Capitalist" and the president of State Insurance Company, then located at the corner of Chemeketa and Commercial streets. He died in 1898 of "la grippe" and is buried in the Salem Pioneer Cemetery. 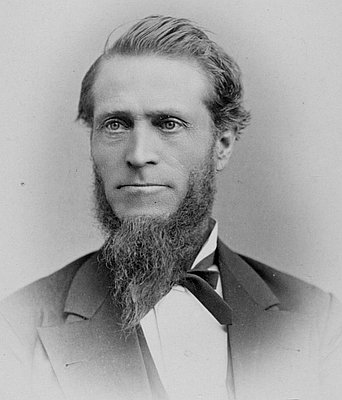 Salem originated in 1841 as the second central station of the Oregon mission of the Methodist Episcopal Church. The town was platted in 1846 and became the seat of Oregon’s territorial government in 1853. The Salem Pioneer Cemetery reflects the people who built the town into an educational center, a …