Both Meriwether Lewis and William Clark wrote about salal (Gaultheria shallon), which they first encountered on the Oregon coast near Astoria in 1806. They noted that elk fed on its leaves and that the Natives dried the dark purple berries in cakes or loaves.

Salal is a handsome and resiliant, evergreen, understory shrub found in coastal forests from British Columbia to southern California. It is notable for its dark green, oval leaves and its purple-to-black, berry-like fruits. Salal can grow so densely that extensive populations growing in clearcuts and burned areas may interfere with reforestation. The fruit serves as food for a variety of native animals that help distribute the seeds.

The plant's common name, salal (and its specific epithet shallon), is derived from Chinook Jargon salla (Chinook kl-kwu-shá-la). Today, berries are made into jams and preserves. The floral industry uses salal as background greenery in floral arrangements. Thousands of workers harvest the plant throughout its range for a business accounting for millions of dollars in sales. 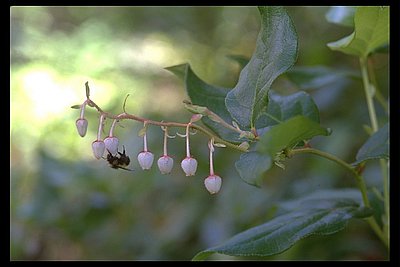