The blackberry cultivar, Marion, often called "marionberry" by consumers and marketers, is the most widely planted trailing blackberry in the world. More than 90 percent of the worldwide acreage of Marion is located in Oregon. In 2007, almost 30 million pounds were harvested from 4,500 acres in the state, with farm sales over $11 million.

Originally bred by George Waldo, USDA-ARS plant breeder, Marion was released in 1956 through the USDA-Agricultural Research Service (ARS) and the Oregon Agricultural Experiment Station. The name Marion was chosen in recognition of Marion County, where it was tested extensively. The largest share of acreage today is still in Marion County, where the climate and soils of the Willamette Valley are ideal.

The pedigree of Marion is rather complex. It contains 44 percent Rubus ursinus (the only truly native blackberry in Oregon, characterized by its outstanding flavor), 25 percent R. armeniacus (the Himalaya, a weed introduced from Europe in the late 1800s), and 6 percent R. idaeus (the red raspberry). In 1948, Waldo selected Marion from a cross of the cultivars Chehalem and Olallie.

Marion is a vigorous, thorny plant that is typically trained to a two-wire trellis. The plants are sensitive to winter cold, and production may vary from year to year depending on the severity of the weather. Marion is usually harvested in July by machines that gently shake ripe fruit off the plants. Over 95 percent of Marion is processed as frozen fruit, puree, and juice. Jams, ice cream, and other products made with marionberries are popular in Oregon and are sold throughout North America. 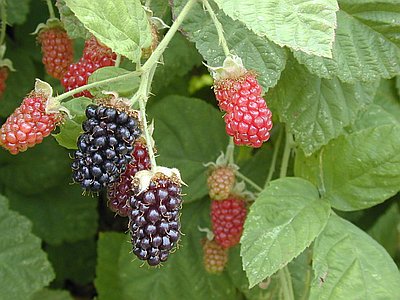 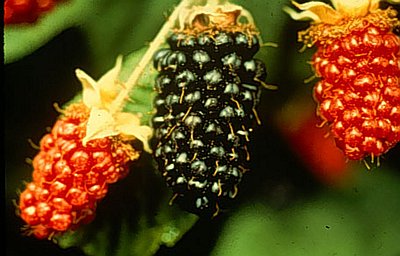