The eastern Oregon town of Long Creek, in Grant County, is located in a valley and near a stream of the same name. In the early days of settlement, it was thought that this stream was one of the longest in that section of the state.

Settlers began arriving in Long Creek Valley in the mid-1870s. With abundant water, the valley was a livestock owner's paradise, and early settlers were small-scale homesteaders with herds of cattle and bands of sheep. The settlement suffered a temporary setback during the Bannock Indian War of 1878. As the Indians moved through the valley, with the U.S. Army in pursuit, the settlers built a fort and avoided an attack. By 1880, there was a store, a saloon, and a post office in town, and 150 people lived in the valley.

The town and valley grew rapidly in the 1880s and 1890s, when a second wave of homesteaders moved into the area. Long Creek was incorporated in 1891, and by 1900 the valley had 524 inhabitants.

Long Creek was a thriving trading center for northern Grant County, supplying ranchers, miners, and townspeople with goods and services. The town boasted many commercial enterprises, two churches, a grade school, and professionals such as doctors and lawyers. The Blue Mountain Eagle, the oldest continuously published weekly newspaper in Oregon, started in Long Creek in 1886 and was published there until 1900, when owners moved it to Canyon City.

Long Creek suffered some disasters in its first fifty years. In June 1894, a cyclone, one of the most severe ever to hit Oregon, struck the community. The high winds destroyed buildings, killed three people, and injured six others. In 1895, and again in 1910, fire struck the town, burning much of the business district. The community bounced back and through the last half of the twentieth century prospered as a lumber mill town and ranching community.

While the mill closed in the mid-1990s, cattle ranching continued as the economic mainstay of the community. The town also has been able to maintain the independence of its public school. In 2000, Long Creek had a population of 228. 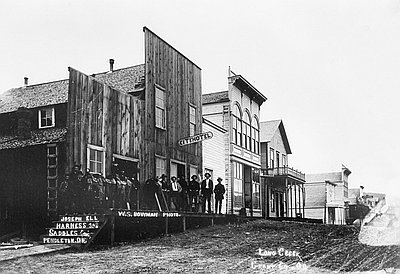 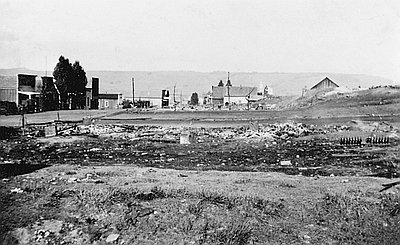