Dayton O. “Hawk” Hyde has been a rancher, naturalist, environmentalist, cowboy historian, photographer, rodeo clown, and writer. Born in Marquette, Michigan, in 1925, he hopped a freight train to Oregon at age thirteen, seduced by the lure of his uncle’s reports of his Yamsi ranch, where there were wild horses and trout he could dip out of the Williamson River with a wash pan. From his first day at the ranch, Hyde was captured by the landscape of the upper Williamson Valley in Oregon’s Klamath Basin and the people who populated it. He eventually became a much published rodeo photographer and performed as a rodeo clown.

Hyde’s life in Oregon was interrupted by World War II, when he served with Patton’s Third Army and swam ashore at Normandy on D Day. Stationed in France after the allied victory in Europe, he brought some of his adopted culture to Europe when he staged rodeos in the Roman amphitheater at Arles.

After he bought the Yamsi ranch from his uncle in the early 1950s, Hyde used his housebound winters to start his writing career. Over the years, he published nineteen books, both fiction and nonfiction. All of his books are characterized by an earthy style, a lyrical appreciation of the natural world, and a sense of the absurd.

Hyde's first book, Sandy (1968), chronicled Hyde’s nurturing of sandhill cranes at the ranch. His second major work, Yamsi (1971), described a year of life at the ranch, highlighting Hyde’s connection to the natural world and his commitment to running his ranch in concert with the environment. The Last Free Man (1971) tells the story of a band of twentieth-century Shoshone Indians who tried to live off the land as their forebearers had, but were murdered by a posse of white men. Don Coyote (1986) describes Hyde’s relationship with the coyotes on his ranch, and his latest book, The Pastures of Beyond, is a memoir of his early life and of his relationships with the Native Americans of the Klamath country.

Hyde has been featured in Life and Parade magazines and has received many awards. Thee Oregon governors presented him with the Conservationist of the Year award; the National Cattleman’s Association honored him as Environmentalist of the Year; and the American Library Association named Don Coyote one of the ten best books of the 1980s. In 1988, Hyde left Yamsi to the care of his wife and five children to establish the Black Hills Wild Horse Sanctuary between Hot Springs and Edgemont, South Dakota. 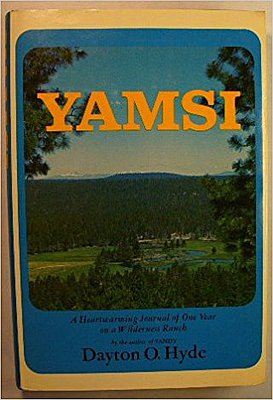