The H.J. Andrews Experimental Forest, located deep in the Willamette National Forest, was established in 1948. Originally called the Blue River Experimental Forest, the Andrews is located on the western slope of Oregon’s Cascade Range. At 15,800 acres, it embraces the entire Lookout Creek drainage, a major tributary of Blue River that flows into the McKenzie River. It is a landscape of narrow valleys, steep mountain slopes, and cascading streams that supports stands of old-growth conifers ranging from four hundred to five hundred years old. It is reminiscent of much of the western slope of the Cascade Range after World War II.

Horace J. Andrews, the forester in charge of Forest Service Region 6 from 1943 to 1951, led the effort to establish the experimental forest as a place to study the effects of logging on forest-stream interactions and downstream flooding. When he was killed in an automobile accident in 1951, Forest Service officials renamed the experimental forest in his honor in 1953. Since his death, the Andrews has become renowned for its pioneering research on terrestrial and aquatic ecosystems.

The national and international reputation of the Andrews had a long gestation and was related to the publication of Rachel Carson’s Silent Spring (1962), the growth of environmentalism, and the Andrews’ participation in the International Biological Program in the mid-1960s. The IBP introduced principles of ecosystems research to the Andrews and brought hundreds of scientists to the residential and office facilities on lower Lookout Creek. Over the years, Andrews scientists moved seamlessly from the IBP to the National Science Foundation’s designation of the forest as one of its original six Long-Term Ecological Research sites in 1980. Since then, the NSF has consistently renewed funding for the Andrews to carry on long-term research. Scientists also rely on a vast array of other funding sources.

Despite its acclaim, few people in Oregon know about the Andrews Experimental Forest, which is located about forty miles east of Eugene near the town of Blue River. Along Highway 126, a sign directs travelers to Blue River Reservoir. Just beyond the reservoir, another sign directs visitors to the H.J. Andrews headquarters, a large compound of buildings and shops—a dormitory, eleven apartments, conference and dining halls, classrooms, laboratories, a library, and a covered seasonal pavilion. The absence of signage on the highway pointing to the Andrews helps protect the forest’s research sites.

Among the early investigations on the Andrews, none would have greater significance than watershed studies. One of the original purposes of the experimental forest was to better understand the relationship between logging practices and healthy watersheds. Those objectives led to investigations of three small watersheds near the mouth of Lookout Creek to study stream fluctuations, water quality, snow accumulation, and moisture in the soil. The investigations had implications for Oregon industries and citizens in determining how to maintain healthy streams and maximize water available for downstream agriculture, recreation, and other uses.

The focus of research on the Andrews has changed over the years. During the post-World War II building boom, scientists focused on how to replace old-growth stands economically and effectively and with fast-growing young trees. In the 1970s, the forest became a center for ecosystem studies, research into the elements that comprise healthy forests and streams. By the 1980s, the Andrews began playing a prominent part in the importance of old-growth forests; endangered species, such as the spotted owl; and healthy watersheds. The science on Lookout Creek became a major factor in land-management and policy decisions regarding leaving woody debris in streams and a host of other management strategies.

With its vast collection of data gathered since the early 1950s, Andrews’ research teams have addressed disturbances such as major storm events and fires, biological diversity, the relationships between forests and streams, and global warming. In addition, since 2003 the Andrews has sponsored artists, writers, scientists, and others who spend time in the forest reflecting on its larger meaning. 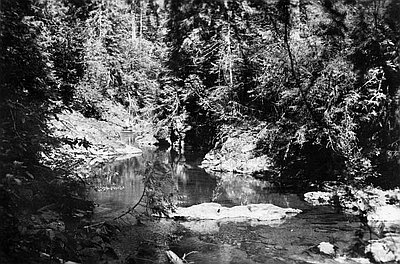