The Enchanted Forest theme park in Turner, Oregon, just south of Salem off Interstate 5, has been a favorite roadside attraction for generations of Oregonians. It was the dream of Roger Tofte, whose job as a young draftsman at the State Highway Department in Salem did not allow him to exercise his considerable creativity and ambition. In 1964, he and his wife Mavis purchased twenty wooded acres on a hillside next to the interstate for $4,000. On evenings and weekends, they built a trail on the property that led to storybook characters, handmade with rebar, cement, wire mesh, and plaster. Tofte’s co-workers at the Highway Department dubbed the property "Idiot Hill," but several were enlisted to work along with Tofte, as were boys from his neighborhood. What was originally envisioned as a two-year project ended up taking seven.

The park opened on August 8, 1971, to seventy-five paying customers. Visitors walked the wooded trail, where they encountered Humpty Dumpty, Little Miss Muffet, Alice in Wonderland, Snow White's cottage and the Seven Dwarves’ mine, the Crooked Man and his crooked house, and Peter Pumpkin Eater's pumpkin house. Admission was a dollar for adults and fifty cents for children, and the staff consisted of Roger and Mavis and their children Susan, Ken, Mary, and Lori.

The park, open daily, was an immediate success. By the second Sunday, 515 adults and 398 children had visited. In 1973, Tofte was able to retire from his job at the Highway Department and devote his time to developing and building new attractions, including the Haunted House (1973), the Ice Mountain Bobsled (1982), the Big Timber Log Ride (1997), and the Challenge of Mondor adventure ride (2006).

In 1990, a winter storm caused twenty of the trees in the park to fall, which did extensive damage to the Ice Mountain Bobsled. An ice storm in 2009 caused more trees to fall, damaging other attractions in the park. In 2014, two visitors to the park, while trying to take a photograph, caused Humpty Dumpty to have a shattering fall. Roger Tofte, then eighty-four years old, worked for fifty days to build a replacement.

For several years, Enchanted Forest was the venue for The Great Idea music festival. It was also the subject of an episode of the Travel Channel's Ghost Adventures in 2018 (season 16, episode 6) and served as a location for an episode of Wyatt Cenac's Problem Areas on HBO in 2019 (season 2, episode 3).

Three generations of the Tofte family now work at the Enchanted Forest, which is open from March until the end of September and draws over 100,000 visitors a year. As of 2019, Roger Tofte still plans new attractions, rides his moped through the park, and makes repairs. "We want to offer our visitors something unique with lots of variety," he said. "We strive to be the hidden gem that people discover as their own special place." 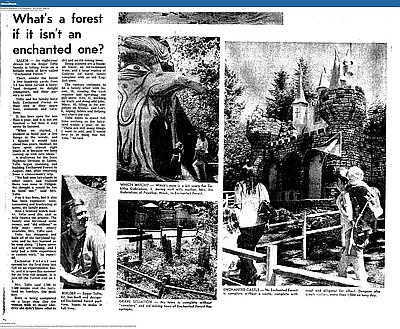 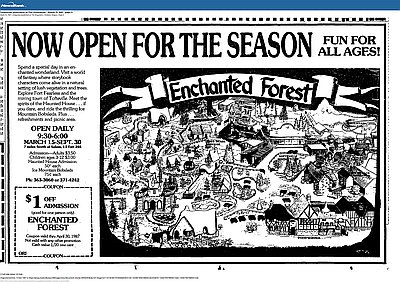 Ad for the Enchanted Forest in the Oregonian, March 15, 1987
Courtesy Portland Oregonian

The Oregon Vortex and House of Mystery, located on Sardine Creek in Gold Hill, is one of Oregon’s oldest and most original examples of Roadside Americana. Opened to tourists in 1930, the attraction is the earliest documented mystery spot or gravitational hill in the United States—a place where bubble levels, …

Prehistoric Gardens, with its twenty-foot-tall concrete Tyrannosaurus greeting travelers a few miles south of Port Orford on Highway 101, has been a successful commercial roadside attraction for over six decades. Along a winding path through a dense forest of spruce and sword ferns, twenty-three life-size sculptures of dinosaurs and other extinct …

Eleven miles north of Florence on U.S. Highway 101 are the remains of an ice-age beach of seafloor basalt, where waves hit fracture zones in the hard basalt to carve what is now Sea Lion Caves, the world’s largest sea cave. The main attraction is the sea lions, which sixteenth-century …