Dora is an unincorporated community on the East Fork of the Coquille River in east Coos County. The community was built along the historic Coos Bay Wagon Road, which opened in 1873. In the 1860s, a settler planted small fruit trees that flourished; some were producing fruit over a hundred years later. The first of three one-room schools was built in 1872; the last school was built in 1954 and closed in 1981. A Dora post office operated from 1876 until 1939. The post office was named "Dora" by the first postmaster, Mr. Roach, who had a small daughter by that name. The only store and gas pump in the community were in business from the 1920s until 2000.

The main industry in Dora was logging, and three mills employed many of the local men during the 1940s and 1950s. The mills brought new families to the area, some of whom bought land and stayed. The mills were closed during the 1950s and 1960s as timber became scarce and leases for the land use expired. Some logging is still done in the area, mainly on private land, but most logs are trucked to a large mill in Douglas County.

In the 1960s and 1970s, a local farm began planting daffodil and other bulbs that were sold in the United States, Japan, and The Netherlands. The bulb farm attracted agricultural students from Japan who wanted to learn American farming techniques. Other agricultural endeavors are limited to small-scale ranching, hay production, and raising beef cattle.

One of the most recognizable landmarks in Dora is the Abernethy house, the largest house in the community. It was built by Edwin P.S. Abernethy, the grandson of George Abernethy, Oregon’s first provisional governor. The house is now owned and occupied by Edwin Abernethy's niece.

The local fire department maintained the last school building as a fire hall and community center for twenty-five years, and it remains the only public building within twenty miles. Volunteers established a library that was later added to the Coos County Library System. The Dora community raised over a million dollars through grants, donations, bake sales, and other means; and in 2009, the community built a new fire hall and renovated the old school, which houses the library and church.

About a hundred families live in Dora, and most of the residents are retired. The closing of the school and the distance from employment discourages young families from moving there. The area is popular during elk and deer season; and steelhead fishing attracts enthusiasts during the winter, when commercial guides come to cash in on the sport. 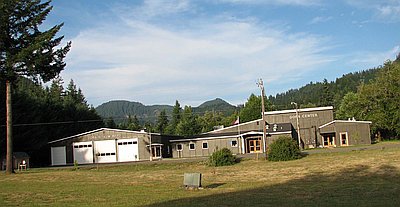 Peterson, Emil, and Alfred Powers. A Century of Coos and Curry. Portland, Ore.: Binford and Mort. 1952.