On December 17, 1889, a group of real estate developers, led by Zephen Job and Miles Wilkins, incorporated the Corvallis Street Railway Company. Within about six months, on June 19, 1890, a horsecar named Daisy began running north from Northwest Second Street and Madison Avenue, west on Northwest Monroe Avenue, then north on Eleventh into Job’s Addition. At the end of the line, riders enjoyed ice water in a comfortable waiting room. In addition, a car barn was erected on Northwest Fourteenth near Polk.

By December 1889, Corvallis citizens raised a requested $3,000 subsidy to build loop tracks reaching both the Southern Pacific depot, on Southwest Sixth Street and B Avenue, and the Oregon Pacific depot, on Southwest Ninth Street and Washington Avenue. This doubled the street railway’s length to two miles. The fare remained a nickel, and the horse-drawn streetcars operated hourly between seven in the morning and eight at night.

During the depression that followed the financial panic of 1893, the northern terminus was cut back to Second Street and Monroe Avenue in an ill-fated attempt to focus on travel between hotels and the train stations. Operations ceased not long after the car barn in Job’s Addition was pulled down in about 1896.

The railway never became a “motor line” as predicted by its manager, Ralston Cox. Perhaps frequent derailments caused the obsolete horsecars to fall from grace. At any rate, after crews removed the rails on February 10, 1900, an account in the Sunday Oregonian bid good riddance to a “dilapidated reminder of boom times.” A 1912 promise by the Southern Pacific Railroad to build a new trolley system in conjunction with the arrival of its Red Electric interurban service was not kept. 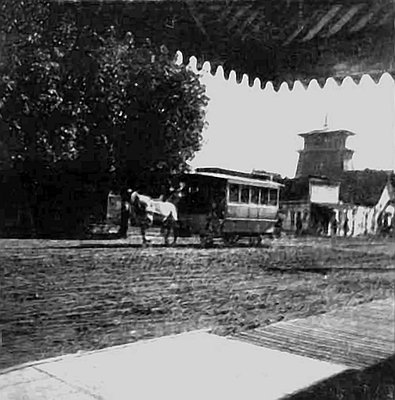 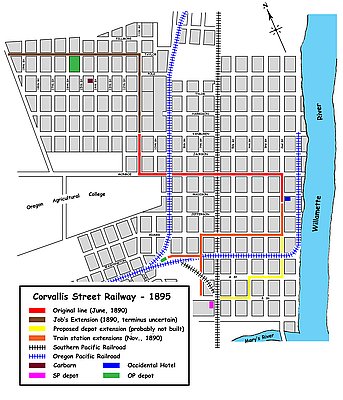 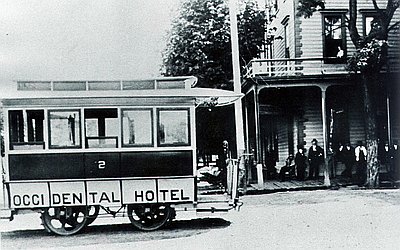 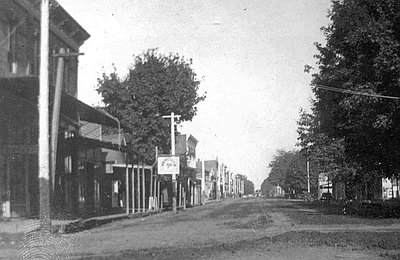 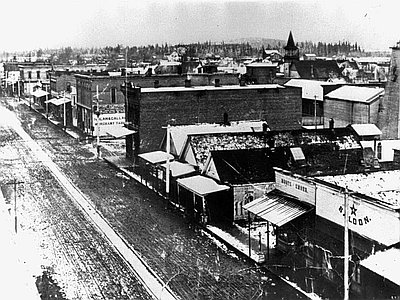 Nestled on the west side of the mid-Willamette River, Corvallis is dominated by Oregon State University, the state’s largest university, and is home to the original offices of the international engineering firm CH2M Hill. Located eighty miles from Portland and fifty miles from the Oregon Coast, the city is known for …

Oregon gained a distinction in 1912 when the Southern Pacific Railroad became one of the few railroads in the nation to convert branch steam railroad lines into an electric interurban network. Growing competition from the Oregon Electric Railway provided motivation, as did successful experience with electric railroad operation in California. …