Mae Harrington, the first woman to hold a position on a hospital staff in Oregon, was born in Cherry Hill, Pennsylvania, on July 23, 1853. A teacher at age fourteen, she married Dr. H.W. Whitney when she was sixteen years old. It is uncertain when and why that marriage ended.

In 1877, she moved to the West Coast. She enrolled at Cooper Medical School in San Francisco in 1881 and graduated in 1883. With an additional M.D. from the Willamette University Medical Department in April 1885, she was hired to be a physician to the children’s ward of the Portland Hospital and a specialist in children’s diseases. She married Dr. James Robert Cardwell, a Portland dentist, on April 13, 1895.

Cardwell became an early and active member of medical societies in Oregon, often as the first woman, and was an important bridge for the acceptance of other women in the profession. She joined the Oregon State Medical Society in 1885, served as treasurer from 1893 to 1903, and later served as vice president. In 1902, she was the first woman accepted in the Portland City and County Medical Society. From the mid-1890s, she served as a contributing editor for the Medical Sentinel, edited in Portland by Henry Coe, M.D. From that position, she chronicled the early history of Oregon medical societies and women’s role in the profession.

Cardwell believed that women doctors should form their own groups for networking and for gaining practice in presenting papers and discussing clinical cases. In 1891, she and three other doctors in Portland—Helena Price, Viola Coe, and Florence King—established a Women’s Medical Club, the first women’s medical society in the West. The organization declined after a few years, but in 1900 Cardwell and a new group of women reinstated it as the Medical Club of Portland. The society flourished through the middle of the twentieth century.

Portland Mayor George H. Williams appointed Cardwell to the city health board in 1903. The first woman physician to occupy that position, she served a two-year term, working for the inspection of food markets in Portland and for city sanitation in general.

Cardwell was active in many other Progressive Era health and social welfare organizations in the city. With the Portland Woman’s Club, she helped establish a Working Girl’s Home and Industrial School. She also served on the medical staffs of the Boys’ and Girls’ Aid Society and the Florence Crittenton Home and was a member of the first Oregon Child Welfare Commission. She was physician to the Portland Juvenile Court and later served as the women’s medical advisor at Reed College.

An active advocate for votes for women, Cardwell was one of five vice presidents for the Portland chapter of the College Equal Suffrage Association in the successful 1912 suffrage campaign. She also participated in a test case at the Vancouver, Washington, army base to claim officer status for medical women during World War I. Though unsuccessful, it was an important part of a national movement to gain a place in the military medical corps for women physicians.

After establishing this important Oregon legacy in medicine and progressive reform, Cardwell returned to Pennsylvania, where she died in 1929. 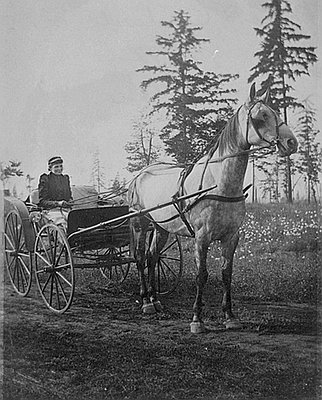