Robert C. Belloni was a federal judge on the U.S. District Court for the District of Oregon from 1967 to 1999. His ruling in United States v. Oregon in 1969, upholding the treaty fishing rights of Columbia River tribes, continues to influence regional, national, and international natural resource management.

Belloni was born in Coos County on April 4, 1919, and attended schools in Coquille and Myrtle Point. With a bachelor’s degree from the University of Oregon in 1941, he was the first in his family of Swiss-Italian immigrants to graduate from college. After his World War II service as a U.S. Army officer in field hospitals in the Philippines and Honshu, Japan, Belloni enrolled in the University of Oregon School of Law, graduating in 1951. He had been a pre-med student as an undergraduate, but after his experience in military hospitals he decided the law would suit him better. He married Doris Adams in 1946, and they had two children. They divorced in 1984, and Belloni married Faye Johnson in 1989.

After passing the Oregon bar exam, Belloni established a law practice and began taking personal injury cases on behalf of workers. He practiced first in Coquille and then in Myrtle Point, where he was elected to the city council and the mayor’s office. A New Deal Democrat, Belloni was active in the Democratic Party at both local and state levels, forging relationships with Senator Wayne Morse and other influential politicians.

In 1957, Oregon Governor Robert Holmes appointed Belloni circuit judge in the judicial district that included Coos and Curry Counties. Assigned juvenile cases, he made improvements in the administration of justice for young people, helping draft the state’s first juvenile code and founding the Oregon Juvenile Judges Association. When he could not find an alternative to incarcerating boys in the state's MacLaren School for Boys (now the MacLaren Youth Correctional Facility), he helped start the Bob Belloni Ranch, a residential program for boys that opened in Coos Bay in 1968.

President Lyndon B. Johnson nominated Belloni to the federal bench in 1967. With the support of Senator Morse, he was confirmed by the U.S. Senate and became a judge with the U.S. District Court for the District of Oregon. One of his first federal cases, Sohappy v. Smith (1969), set the trajectory for much of the rest of his judicial career.

In Sohappy v. Smith, fourteen members of the Yakama Nation sued the heads of the Oregon Fish Commission and the Oregon Game Commission, claiming the state was violating their treaty fishing rights. In 1969, Belloni consolidated Sohappy v. Smith with another case, United States v. Oregon, which the federal government had brought against the state in support of three Columbia River treaty tribes—the Warm Springs, Umatilla, and Nez Perce.

His decision in United States v. Oregon affirmed the tribes’ fishing rights not only in waters that run through their reservations but also in “all usual and accustomed places,” rights guaranteed to the tribes in their 1855 treaties with the U.S. government. The judge gave the fishing rights wider effect when he ruled that the treaties reserved for the tribes a “fair share” of the harvest of fish on the Columbia and its tributaries (based on the state-established limit on fish caught). The ruling underscored that states could regulate Native fishing only when “reasonable and necessary for conservation” and must provide proof that such regulations were necessary for conservation. His ruling enumerated other standards the states must comply with, including that regulations must not discriminate against Indians and that the tribes must be afforded “meaningful participation” in fish management.

The “meaningful participation” requirement was an affirmation of tribal sovereignty and the first significant judicial recognition of the tribes’ control over their natural resources. The standard prompted a long series of collaborative tribal, state, and federal fish management plans for the Columbia Basin, a management process that now extends to the negotiation and renegotiation of international treaties. An established legal precedent, U.S. v. Oregon, along with the fish management plans that resulted from the litigation, are used as models in other natural resource cases and regulatory decisions across the nation. Belloni’s 1969 ruling also helped shape Judge George Boldt’s 1974 decision in U.S. v. Washington, a case involving the treaty tribes of Puget Sound and coastal Washington.

Belloni presided over U.S. v. Oregon for twelve years, evaluating and ruling on co-management plans for regulating the fishery that involved government agencies and the four treaty tribes. He stepped down from the case in 1980, stating that he could no longer be neutral, as he had become favorably disposed toward the tribes. He freely admitted that prior to U.S. v. Oregon he had no awareness or knowledge of tribes and their culture. That quickly changed as he studied the relevant law and the history, culture, and religion of the tribes in the case.

After succeeding Gus Solomon as chief judge in 1971, Belloni initiated a sentencing council among the district’s judges as an advisory body on criminal sentences and helped develop a federal magistrate system to address the Oregon district and other federal courts’ growing caseload. His management of mass court claims—civil actions with many plaintiffs and often a single defendant—won him acclaim and additional work in other federal districts. He is also known for litigation involving asbestos poisoning and the Dalkon Shield, a defective intrauterine device used to prevent pregnancy.

Belloni served the U.S. District Court for the District of Oregon until his death in 1999. 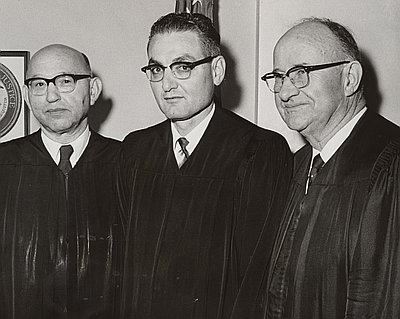 Born and raised on the Yakama reservation in south-central Washington, David Sohappy began catching salmon at age five and spent much of each year along the Columbia River. "That is where I learned about Indian language and religion," he recalled. "I remember going to the longhouse from way back then, …