Until recently, the genus Alyssum in the Mustard family (Cruciferae or Brassicaceae) was not an important part of the Oregon flora. One species, A. alyssoides, yellow alyssum or pale madwort, is a widespread innocuous weed found in the southern Oregon Cascades and northeastern Oregon. Two others, A. desertorum and A. simplex in eastern Oregon, are equally innocuous. The other two species, A. murale and A. corsicum, may be another matter.

About 190 Alyssum species are native to the Mediterranean and Eurasia. Many species are limited to special soils derived from parent materials (rocks) high in magnesium and heavy metals such as iron and nickel. A number of these species hyper-accumulate nickel above concentrations found in the soil by taking the metal in from the substrate and storing it in the plant body. Because of this ability, phytomining technology was developed to extract metals by growing the plant in quantity and then processing dried plants to extract the mineral or metal. This avoids ecosystem damage caused by removing soil and transporting it to a mill for mineral extraction.

Soils high in magnesium and nickel are common in southwest Oregon. Traditional mining interests attempted to use standard mining procedures, which call for the removal of metal-bearing soil and transport to a smelter for final extraction, a polluting process that requires extensive remediation.

To avoid this, the Agricultural Research Service of the U.S. Department of Agriculture and Oregon State University did crop development research with Viridian Resources LLC, an environmental remediation firm in Houston, Texas. Beginning in 2003, they conducted tests in the Illinois Valley to determine if plants adapted for life in low-silica ultramafic soils could be used to hyper-accumulate metals, especially nickel, in commercial amounts. Viridian Resources hoped to see if phytomining was an economic and ecologically viable way to extract nickel from the Illinois Valley.

Viridian chose Alyssum murale (yellowtuft), which is native to the Balkans and Turkey, and its relative A. corsicum from Corsica. Yellowtuft produces masses of yellow flowers and is a prolific seeder; and its height, from ten to thirty-six inches tall, makes it possible to harvest it by mechanical means. In addition, it is well adapted to the long, hot summers and relatively mild winters of southwest Oregon.

Viridian Resources eventually determined that the project was not economically viable and ceased operations. Unfortunately, however, the yellowtuft continues to grow and thrive. It is perfectly adapted to Oregon's soils and climate and lacks any of its diseases, insect pests, and native competitors. These two species have the potential to become a major noxious weed on ultramafic soils. Efforts are underway to eradicate the weed. Herbicide application has been quite successful when applied early enough, but it will not prevent germination of seed.

In addition to being poisonous to livestock, yellowtuft may out-compete many of the threatened and endangered endemic plant species for which the area is famous. At particular risk for mass invasion are the extensive serpentine soil areas disturbed by the Biscuit wildfire in 2002. 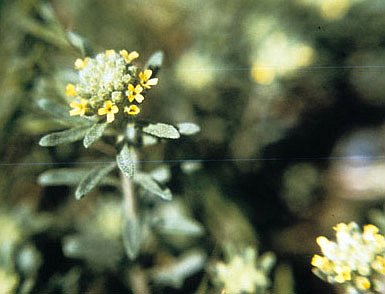 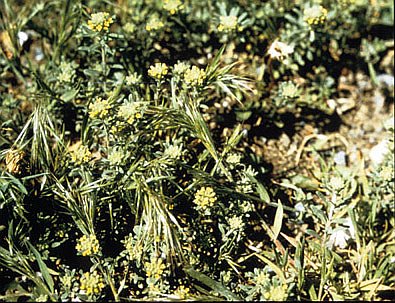