George W. Aguilar, Sr., is a Wasco elder and life-long resident of the Warm Springs Reservation who won the 2006 Oregon Book Award for Creative Nonfiction for his book, When the River Ran Wild! Indian Traditions on the Mid-Columbia and the Warm Springs Reservation. The book, which also received the 2006 Award of Merit from the American Association for State and Local History, has been widely praised for its well researched and clear-headed blending of tribal traditions and customs, written history, and personal recollections. It is the first book on the heritage of the Warm Springs people to be written by a tribal member.

Aguilar was born in The Dalles in 1930 to Easton Aguilar (a native of the Philippines) and Evelyn Polk, of Warm Springs. The next year his father drowned in the Columbia while net-fishing with his in-laws, and after the death of his mother in 1932, his maternal grandparents James and Hattie Symintire Polk took him to their ranch on the Warm Springs Reservation, where he grew up in a very traditional Native environment. His formal schooling ended at 14, and he worked as a laborer, fisherman, logger, and gambler, before enlisting in the Army in 1949. After service in Okinawa in the Korean War, he was treated in 1954-5 for tuberculosis in a sanitarium in Tacoma, where he met his wife, Ella Kurip, a Ute from Fort Duchesne, Utah. The Aguilars moved back to Warm Springs in 1956 and raised a family of four sons and one daughter, followed by many grandchildren. Ella passed away in 2008. Aguilar served as construction manager for the Confederated Warm Springs Tribes for several years and, as of 2008, works with his son and grandsons as a reforestation and timber-thinning contractor.

Aguilar says he wrote When the River Ran Wild! mainly for his grandchildren—to preserve and convey to them the ancestral values of their people, especially the traditions and ceremonies of naming, whereby the history of the Mid-Columbia Indians was passed along from generation to generation. A tireless researcher, in 2008 he had two new books underway: a Warm Springs ethnobotanical guide; and Shattered Civilization, a long narrative of Chinookan and Sahaptin life from the eighteenth century to Reservation times. 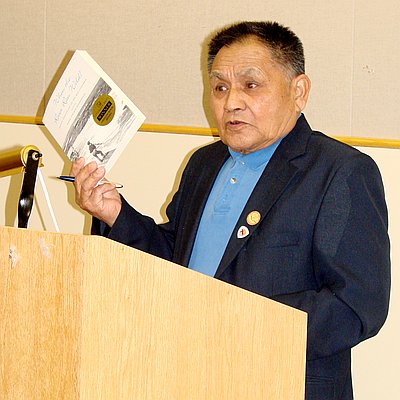