The Lake Washington Shipyards in Houghton, Washington, launched the U.S.S. Coos Bay on May 15, 1942. It was built to serve as a "small seaplane tender" (U.S. Navy designation AVP) and received the hull number AVP-25. Barnegat-class vessels were named for bays, inlets, and straits in the United States, and the Coos Bay was named for Coos Bay, Oregon. This lightly armed ship displaced 1,650 tons, was 319’9” in length, drafted 13’6”, and had a top speed of 18 knots. It carried a crew of 215 and entered service with the U.S. Navy's Pacific Fleet in mid 1943.

Throughout 1943, the Coos Bay served in support roles in the Pacific. After overhaul in San Pedro, California, in late 1943, the ship was sailing west in March 1944 when it collided with a merchant vessel and was forced to return to San Pedro for extensive repairs. From September 13 to December 2, 1945, the Coos Bay was based out of Ominato Ko, Honshu, Japan. After that duty, the ship sailed to Orange, Texas, where the navy placed it in reserve on April 30, 1946. On January 5, 1949, the navy loaned the ship to the U.S. Coast Guard.

The Coos Bay's nomenclature changed with its uses by different branches of the U.S. Armed Services. From 1949 to 1965, the Coast Guard designated it WAVP-376, that is, as a Coast Guard seaplane tender; in 1966, the Coast Guard identified it as a high-endurance cutter with the hull number WHEC-376. From 1949 through 1966, the ship was assigned to the 1st Coast Guard District and based in Portland, Maine. It served in the North Atlantic in the roles of law enforcement, search-and-rescue, open-ocean navigation aid, and communications relay station.

The Coast Guard decommissioned the Coos Bay on September 1, 1966, in Boston, and the ship returned to the U.S. Naval Register in December 1967. On January 9, 1968, the navy struck the Coos Bay from its register when it sunk the ship during target practice off the coast of Maryland. 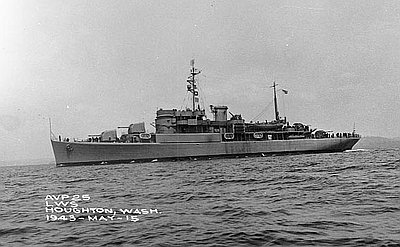 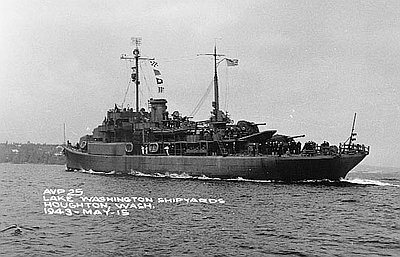 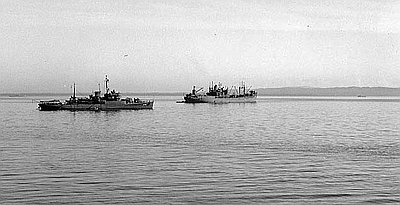